Our flameworking demonstration team is small but mighty — Eric Goldschmidt, Vince Desparrois, Caitlyn Hyde, and Jennifer Kuhn manage to pack loads of information into their daily public demos in the Innovation Center. For our current special exhibition, Fragile Legacy: The Marine Invertebrate Glass Models of Leopold and Rudolf Blaschka, Eric and his team investigated how the Blaschkas may have made their exquisite marine invertebrate models. One of the biggest challenges was minimal records of how the Blaschkas made their models. The father-son team learned glassmaking through lessons passed down by previous generations of their family over more than 400 years. But Rudolf Blaschka never had any children and never passed on the secrets of his craft. So there is a bit of mystery about exactly how their work was made.

The flameworking team met with the Museum’s conservation team for some clues to the methods the Blaschkas may have used to make their models. Along the way, they each discovered interesting aspects of the Blaschkas’ work that inform their public demonstrations. Eric and his team have each created an “Investigating the Blaschka Legacy” box to share with guests during demos. The boxes help illustrate for visitors the process and study that goes in to making a model. Eric Goldschmidt displays his version of the
Blaschkas’ Cladonema radiatum.

Eric Goldschmidt, leader of the demonstration team, chose to investigate the Blaschkas’ Cladonema radiatum (Blaschka Nr. 141a), a sea jelly. He started his investigation by actually drawing the model, much like the Blaschkas made detailed drawings of the animals they were recreating. The drawing process forced Eric to look more closely at the details of the model. Conversations with Stephen Koob and Astrid van Giffen in the Museum’s Conservation Department helped Eric understand the variety of parts that make up the model, how all those parts fit together, and the skills needed to make and assemble the models.

“The biggest challenge I had was in the assembly process. The tentacles are glued to the bell of the form. It is crucial that the ends of the tentacles, and the spots on the bell where the tentacles are attached, are cut and faceted just right so they align properly for gluing,” explained Eric. He said that it was a big realization to see the full scope of skills and knowledge needed to make the models. “The Blaschkas were skilled at everything from painting and drawing to gem cutting and cold-working to goldsmithing which made my investigation so much more fascinating.” 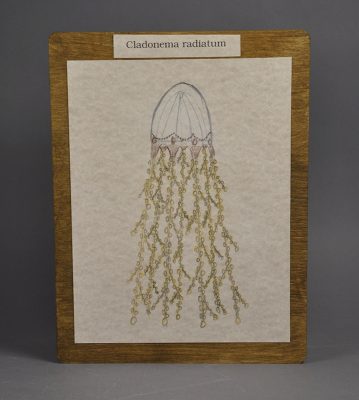 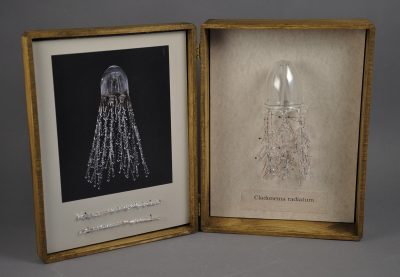 Eric Goldschmidt’s “Investigating the Blaschka Legacy” demo box with his model and investigations.

Eric hopes to apply some of what he’s learned to his work in the future. He is particularly intrigued by how the Blaschkas used metal wire to increase stability in models that are particularly fragile and detailed – like the tentacles of the jelly he studied. He plans on exploring the glass and wire combo in his own work.

In the meantime, Eric is able to give guests more insight into how the Blaschkas developed their amazing body of work during the daily Investigating the Blaschka Legacy demos. You can watch Eric and the rest of the team in the Innovation Center’s Glass Flameworking Demo stage at 11:20 am through Labor Day, and after Labor Day at 11:45 am until the exhibit closes on January 8, 2017.