In 1675, King Charles II founded the Greenwich Observatory near London, primarily in order to tackle a basic problem that vexed his navigators: the longitude problem. Latitude is quite simple to find: finding the altitude of Polaris (the pole star) at night, or of the sun during the day (and then doing some calculations), will give you your current latitude. But finding longitude is just as important for finding your way around the world, or for mapping it. In order to determine longitude, one has to be able to find the difference in time between local noon and noon at another location, such as London. This was a difficult problem, one vital for navigation, as Dava Sobel eloquently described in her best-seller, Longitude.

An astronomical solution was wanted, so the Greenwich Observatory, just south of London, was built and tasked to solve the problem. About 200 years later, partly in honor of its origin and tradition, Greenwich became the Prime Meridian, the zero point that marks how we measure longitude for all places around the world; it also stands as the reference time zone (Universal Time) for all of the world’s time zones.

One solution to the longitude problem, proposed by Galileo, involved observing Jupiter’s moons. Edmund Halley (of comet fame) suggested observing and timing when the moon was blocked (or occulted) by a star that had been accurately mapped. Other methods were also offered, including the construction of an accurate marine chronometer. Not surprisingly, then, today’s National Maritime Museum at Greenwich has an extensive collection of 17th and 18th century telescopes. In one day, we examined over a dozen of them in a distant storeroom on the outskirts of London. The cab driver was not pleased to end up in a place where he couldn’t pick up a new fare. And at the end of the day, we waited quite some time for a different cab to pick us up and return us to our central London hotel.

Some of these stored telescopes are pretty much your ordinary, garden-variety 300-year-old telescopes, and yes, it feels a little odd to be saying that.

A few combine features from disparate periods, which suggests that our categorization is not going to be neat and tidy. But they serve a vital role in showing transitional forms, not unlike the fossil record. 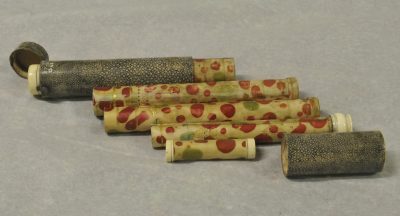 Tooling similar to the Luneburg telescope.

We also noted that one has tooling very similar to that of one in Luneburg, Germany; that may or may not be significant, but noting patterns and similarities is the basis for making important discoveries.

One telescope in particular stands out from the day. Telescope with a flared end and a metal tube.

It’s odd in having a flared end and consisting of a metal tube, both of which are highly unusual. It has all the features of an old instrument, but the glass seems too good to be true (as suggested by its Ronchi test, photo 6). We don’t really know what to make of it, which makes it much more interesting than those we do know how to catalog with ease.

A few other interesting ones remain – we will have to return at the end of next week.