The Expanding Horizons programs is a week-long program at The Corning Museum of Glass for the top students in at-risk glass art programs around the United States. The outreach program includes airfare, lodging, and meals for the duration. The itinerary blends instruction, touring the collections with curators, a visit to the Rakow Research Library, a meeting with a prominent collector, a discussion about preparing an artist’s portfolio, and a presentation on applying to college with a focus on glassblowing. Last summer, N’kosi Barber was one of six students chosen for the inaugural Expanding Horizons program at The Studio of The Corning Museum of Glass. This year, he came back for more, but not as a student. Instead, he mentored a student from Chicago’s Project Fire program.

During the last day of the week-long program, N’kosi took a break from helping his mentee, 17-year-old Roberto Cisneros, with his final project to talk about glassmaking and his Expanding Horizons experience.

Talk a little bit about what brought you to glassmaking.
In high school, I drew a picture of the rainforest and my school put it on the wall. So as soon as you came into the school, it was right there. The glass teacher at my high school had seen it, found out who I was, and invited me to the studio. I had time at school and got to leave at 12 because I had all my credits. After I started working in the glass studio, I didn’t leave until 8 or 9 o’clock at night. That’s when I knew, that’s what I want to do. I was already an artist, and what really drew me to glass was that it was a different kind of art that I had never experienced before and it made me feel excited.

Last year, you were a student in the Expanding Horizons program. This year, you are a mentor. How is that experience different?
Actually, it’s not really too different. Last year, I was learning new techniques. This time is more of a learning experience because I’m a mentor and I have to guide my mentee in the right direction and keep his head in the right space. He’s 17 so sometimes he’s going different places at the same time. This time, I have to be more of a grown-up.

What advice have you given to Roberto to help him grow as an artist?
I like sculptural work and I like to bring my feelings into my sculptural work. I tried to put that into his head—don’t make something that you don’t believe in, because when your work has meaning, you work harder. When you have meaning, somebody else can relate to your meaning. People will gravitate toward you more, and know about you more, and that will build your confidence up so you keep going with your craft. 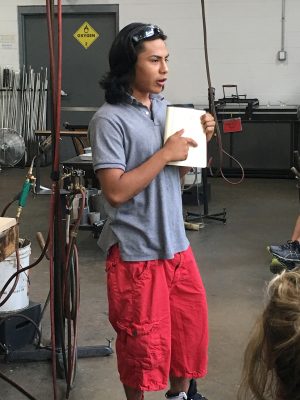 Roberto explains his concept sketches to his classmates. 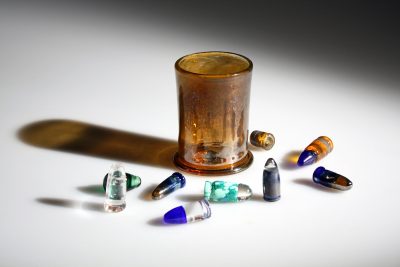 For Roberto’s project, he wanted to make a glass slipper but he didn’t know why he wanted to make it. We had some complications and I told him to think about what you’ve got going on in your life—what’s happened to you, what’s happened around you—and base your art piece on that. What made me proud was he thought of his experience when he got shot. So he decided to make bullets and a large shell casing. The large shell casing with no bullet in it represents him—the bullet was inside of him and the shell casing was right there when he was shot; he saw the shell casing on the ground. Everybody else made individual bullets, so there are about 10, 15 bullets that everybody made­—and they represent all his friends around him that got shot, too, and, in general, people from Chicago because we’ve got a lot of gun violence. So that made me super proud because that’s a meaning that he can take anywhere. If you’ve never witnessed gun violence, just by looking at his piece and his story, it gives you that feeling in your heart, it shows you where he’s coming from, what he’s thinking about, what’s going on around him. It gives you that soft spot, and I guess that’s what we’re looking for.

How has this experience helped you grow as an artist and as a person?
I’ve learned not to force things. You don’t want to fail in front of everybody. Failing isn’t bad, but you want to be prepared. So I was on him and on him and on him, but sometimes you’ve got to let things flow. I needed to let him sit back and think about what he wanted to do. You can’t rush a great thought. With my first piece, that’s what happened. It was a week before the competition*, and I didn’t know what I was going to do. I thought of a glass fist, but my meaning didn’t come until later. As I was making the fist, I thought about the NAACP and black power, and other things to incorporate with it. So I put barbed wire around it—it had the fist coming out of the barbed wire with a little blood on there. And it became about overcoming things, and it had a whole other feel about it and what it meant to me. I made it two, three days before the competition. And I won nationally in second place. Sometimes you’ve just got to let it come to you and it will work out for the best.

*In 2013, N’kosi entered the NAACP’s annual ACT-SO competition. He placed second nationally in the Sculpture category.

Where do you go from here?
Next year in 2017 in June, I have a glass art performance at the GAS conference in Norfolk, Virginia, and I get to bring six to eight people with me. I’ve got my job at Project Fire where I work with kids that have been victims of gun violence, and we have a small glass performance that we’re going to do for Chicago. I hope to bring a lot more kids from Chicago and other places that have high crime rates, and take them out of their elements and bring them to places like Corning, nice places they haven’t seen before so they can get a little confidence to know they can get out of their situation.

This is my first shot at being a mentor, but I feel like I’ve been mentoring all my life. This is where I’m supposed to be—it’s in my heart. I like to inspire people. Somebody gave me the opportunity and inspired me, so I just want to bring that to other people. I’m just doing something I love. I tell people that I didn’t know I was going to do art. I ended up doing it and now I’ve found my career path. You can do the same thing—don’t be a statistic. Don’t box yourself in—when we take a challenge, we’ve got a lot of stuff going for us. Always follow your dreams.

This interview has been condensed and edited. Expanding Horizons at The Studio of the Corning Museum of Glass is a partnership with the Robert M. Minkoff Foundation.