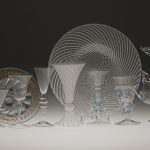 It is rather well known that in Venice, a ‘Golden Age’ of compositional, vocal, and instrumental musical creativity and virtuosity emerged, then flourished during the mid-1500s to the mid-1700s. The influence of this extraordinarily expressive music was intense and widespread: For example, polychoral music written for the church of San Marco heavily shaped the music of William Byrd working in far-away England. Later, the concerti grossi of Vivaldi and his contemporaries would inspire the very-German J.S. Bach (no less!) to reconsider fundamental aspects of musical form. In short, for an impressively long period of time Venice proved to be a powerful ‘incubator’ for musical theory and practice.

Interestingly — and surely less well known — during the very same time, the art and craft of glassblowing in Venice rapidly rose to a similar degree of pan-European prominence. Between about 1500 and 1725, the royal and aristocratic, the wealthy and powerful throughout Europe bought their finest luxury glass exclusively from Venice. For La Serenissima and its obsessively controlling government, the Venetian glass industry became a prestigious, lucrative, and very well-guarded monopoly. Kind reader, tying Renaissance and Baroque-period music together with glass must, at first glance, seem an odd pairing indeed! To me, though, the combination is perfectly natural: I began glassblowing at age 11 and started keyboard studies four years later. By 15, early Venetian glass fascinated me above all other styles and periods. At 17, learning Bach on the organ and harpsichord was glass’ only rival. My fate was set …

While all of my education is in music — I have an undergraduate degree in organ performance and a master’s degree in harpsichord from The Juilliard School (oh yes: I played my New York debut at Carnegie Recital Hall in 1975) — my professional life has entirely been in the field of glass: I’ve been resident advisor at The Studio of the Corning Museum of Glass since 1995.

On February 1, 2016, The Corning Museum of Glass released its first electronic publication The Techniques of Renaissance Venetian Glassworking, written and ‘performed’ by me. I write ‘performed’, because the heart of the book is 44 newly-made videos of my recreations of how I believe these ‘fragile beauties’ were made: if you’ve not seen virtuoso glassblowing, you might-well be surprised how unexpectedly fascinating the process is to observe … call it 16th-century performance-art! I invite you to first view one of the shorter videos: Simple Flared Wineglass.

Certainly the historically-informed-practice movement, along with the use of period-instruments has shed fresh, new light on old masterpieces. Also, I suspect that we all know the pleasure of gaining a deeper appreciation of a beloved work of music partly through developing a greater understanding of the cultural milieu in which it was written and first performed.

It may, however, come as a surprise that only an hour’s gondola ride from San Marco, when Claudio Monteverdi was rehearsing the 1610 Vespers — and a hundred years before, and a hundred after — the maestri of Murano were busy creating perhaps the most virtuosic glass objects of any period, and that their process, glassblowing, is remarkably similar to the activity of playing music on an instrument. In fact, for me they are essentially identical. I do hope that you will explore a few of my videos and see if you agree. Whether you do or not, perhaps along the way you’ll develop a fondness for one of La Serenissima’s other points of pride beside music — Venetian glass.

Carnegie Hall is celebrating the music and arts of Venice in an event, La Serenissima: Music and Arts from The Venetian Republic, next February.