The oldest surviving telescope in the world – at least with clear evidence that it’s the oldest – has no connection with astronomy at all. Instead, it was made for the Pommersche Kunstschrank, a cabinet of curiosities made by Phillip Hainhofer for the Duke of Pomerania. The original cabinet was destroyed in World War II, but its contents, including this telescope, survive and are on display in the Kunstgewerbmuseum (Decorative Arts Museum) in Berlin.

The telescope is made of a paper tube covered with lovely blue marbling. 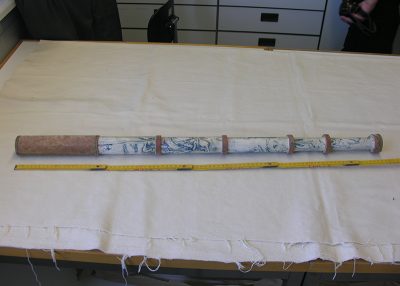 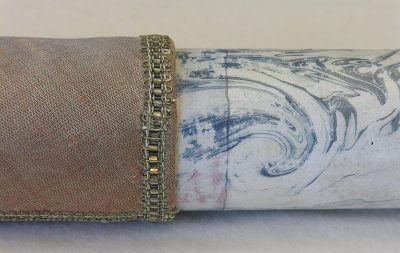 Visible in a few places is a pinkish marbling that would have been quite striking originally. The main tube, and the ends where the lenses are housed, is covered in velvet, much of which has been abraded away. 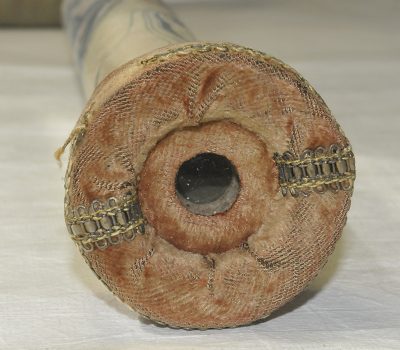 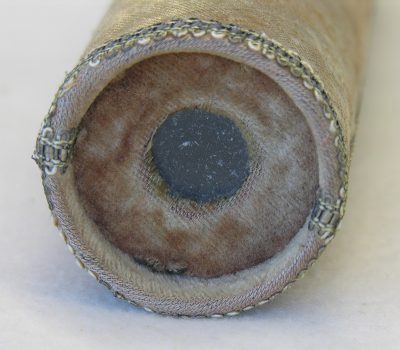 Along with Michael Korey and Tiemen Cocquyt, I was privileged to spend an entire day looking at this treasure, greatly assisted by Sophie Hoffmann, a metals conservator at the decorative arts museum. We first explored the interior of the tubes with a borescope. Although we didn’t find any writing, we could determine that it was (probably) possible to remove the lenses.

The lenses gave us some surprises. Given their very different color, they were made from different glass batches. Both are grozed and unpolished, flat on one side, curved on the other. The object has several long gouges on it, one perhaps from scoring it, another a loop that combines with the gouge seemingly to form the letter P. 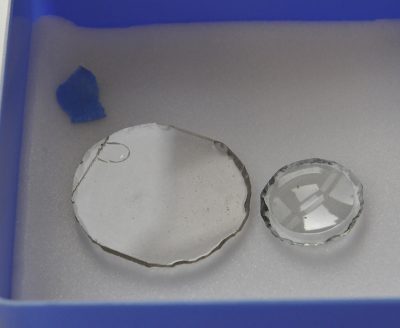 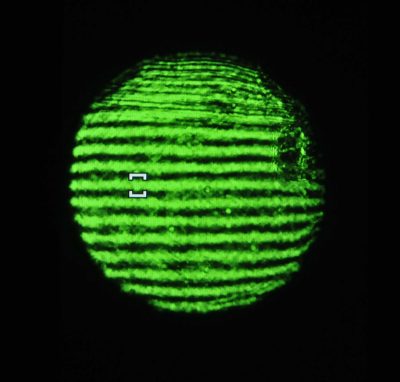 Even so, it is of extremely high quality, as shown by the Ronchi test (above, right).

The eyepiece lens has a central well, like others from the early years of the telescope.

All day long, we couldn’t stop smiling because of the extended time we had to spend with this treasure. We had a look at distant objects, including a victory column barely visible to the naked eye, but easily observed with this precious instrument. 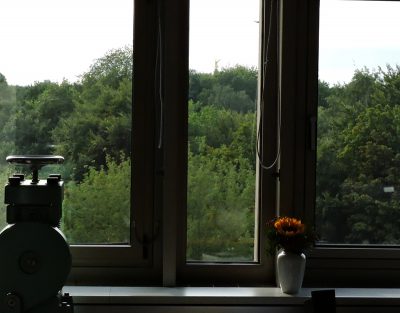 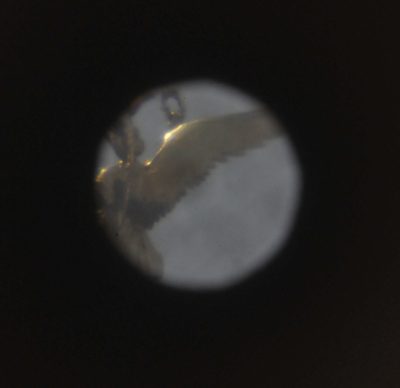 The smiles ended when we returned to the hotel, where I ran over my toe with my suitcase, and had to spend three hours at a local emergency room to get a tetanus shot, an X-ray, and a prescription to prevent an infection.

Even then, at 100 euros, that was a small price to pay for such a wonderful day!

See all posts in the Telescope Quest series.