In its narrowest definition, a sketchbook is simply “a book filled with paper that is used for drawing” (Merriam-Webster). But if you look closely, sketchbooks are so much more than just pages with markings. They can also help provide an intimate journey into an artist’s mind. A sketchbook can be any bound book with blank pages in which an artist collects and externalizes their thoughts. They can contain visual records of observations, ideas for future projects, personal reflections, and inspirational imagery. Ultimately, a sketchbook documents an artist’s progress and development as well as illuminates the personality of its creator. For researchers, these items offer invaluable information on an artist’s life and career.

At the Rakow Research Library, many of our archival collections include sketchbooks. Here are a few examples of how artists represented in our collections have used blank pages to record their personal odysseys. 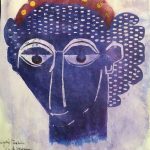 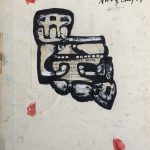 While studying at London’s Central School of Arts and Crafts in the 1950s, stained glass artist Robert Sowers explored the city’s museums. Armed with a sketchbook, he recorded images of the artworks he observed. This striking purple watercolor is Sowers’ interpretation of a portrait he saw in the Coptic textile collection of the Victoria and Albert Museum. A playful side is also present in his sketchbooks as evidenced by the little figure he doodled around the book’s publication information. 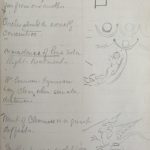 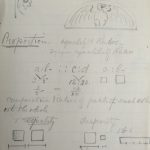 In 1889, a young Frederick Carder attended a lecture on ornamentation. He dutifully took notes during the talk, and enhanced those notes with examples of the topics being discussed. You can see his mind processing the subject of proportion through his sketches of vases. He might not have paid such close attention throughout the whole lecture, though: the drawing of a dragon on the left could be a flight of fancy doodled in a moment of daydreaming. 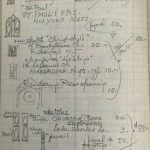 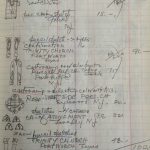 Stained glass designer Katharine Lamb Tait kept extensive records of the commissions she received while working at J&R Lamb Studios. As seen in this page from 1954, not only did she keep track of the commissioning institutions and the prices of the items rendered for them—such as painting, cartoons, etc.—she also drew small, informal sketches of the shape of the windows she was designing. These help to provide a very informative visual record of the scope of her career. 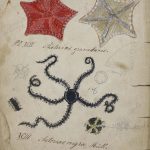 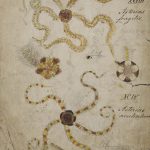 In one of his sketchbooks, lampworker Leopold Blaschka painted these beautiful watercolors of marine invertebrates that he copied directly from illustrations found in naturalist Otto Friedrich Müller’s 1778 book Zoologia danica. Even after they obtained their own aquarium, Leopold and his son Rudolf frequently based their drawings on existing illustrations like those of Müller and Philip Henry Gosse. These watercolor sketches served as practice for the eventual design drawings and glass models of marine invertebrates the Blaschkas produced. 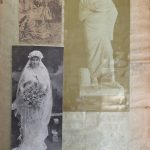 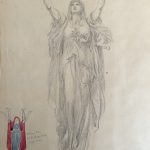 In his sketchbooks, early 20th-century stained glass artist Frederick Wilson often included clippings of images that inspired him and that he could use as references for different design elements. In the example above, he collected images depicting different forms of drapery. His sketches of a figure with arms raised show the influence these clippings had on Wilson’s realistic depiction of draped fabric.

To discover more sketchbooks in our holdings, come explore the archival collections at the Rakow Library. See guides to our collections for more information.