A long day that began at 5 am (to take an early train out of Leiden, The Netherlands) ended at 3:30 am in Dresden, Germany. In between, I was tempted, at a brief train transfer in Hannover, to visit the gravesite of astronomer Caroline Herschel; although it was only an eight-minute cab ride away, prudence suggested I try to make the train to Dresden instead. I followed this advice, even if reluctantly.

The train eventually arrived in Dresden in late afternoon. After a quick stop at a juice bar, I went with colleague Michael Korey to one of the 14 museums in the Staatliche Kunstsammlungen Dresden (SKD), the State Art Collections in Dresden. There, we met with Carsten Wintermann, a paper conservator, and Ludwig Kallweit, an art historian specializing in studying cabinets made by Philip Hainhofer in the early 17th century. 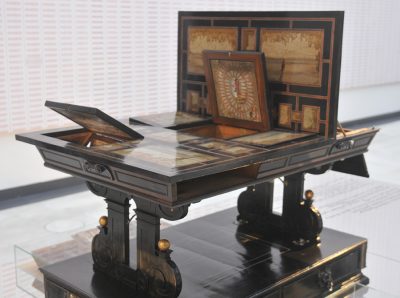 The 1627 cabinet made by Hainhofer. 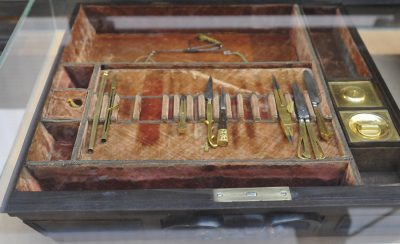 The drawer that likely contained the telescope.

The item in question this evening is a telescope that Michael and I discovered a decade ago in the storeroom of the SKD decorative arts museum. It was made before 1627 for one of Hainhofer’s cabinets, giving it a very solid provenance.

Carsten had made a replica tube to house the original lenses so that we could go outside and look through the nearly 400-year-old telescope. We were able to take the replica tube, supplied with the original lenses, outside to look through it. To keep the lenses safe, we strapped the telescope to a mount on a tripod. We turned the telescope to a clock on a nearby tower. The nearby clock tower.

As you can see, the view through it is quite good. The view through the 400-year-old telescope lenses.

We then took the lenses inside, and made some careful measurements of its properties and qualities, before planning for our next several visits. All in all, it was a lovely, albeit very long, day.