This week marks the 20th anniversary of the opening of The Studio of The Corning Museum of Glass, one of the foremost teaching schools for glass in the world. To celebrate, we have been featuring 20 artists in the 20 weeks leading up to the birthday. These artists have studied, taught, and created at The Studio. For a complete list of birthday festivities on Thursday, May 26, visit The Studio at 20.

Today, we share a message from The Studio’s director, Amy Schwartz.

In 1995, my husband Bill Gudenrath and I moved to Corning, NY, to design, build, program, and lead The Studio. Twenty years later, we are still at it—and it has been a wonderful journey!

I remember when it all started. Bill had been teaching, and I assisting him, at a small studio in Corning called Studio Access to Glass. This studio was supported by a local arts organization, 171 Cedar Arts, which was very heavily involved with dance. Glass was out of its main mission. Studio Access was run by Rodi Rovner (and still is, but now it is privately-owned and called Hands-on Glass). Rodi really wanted to keep glassworking in the Corning community. There were others, too – Beth Hylen, a librarian at the Rakow Research Library; Frank Woolley, a scientist from Corning Incorporated; and Marcia Weber, a local glassblowing student. They got together to devise a plan for a studio in Corning. I remember having a dinner with Beth and Marcia where they asked Bill and me to move to Corning and be a part of this. Things developed and David Whitehouse, then director of The Corning Museum of Glass, became involved. It had always been in the Museum’s charter to have a studio, David said, and now was the time to do it! David and Bill had a long relationship working together on historical glass problems. David knew that Bill’s name and reputation would attract artists and students and he knew I could make a successful studio actually happen. David and the board of trustees invited Bill and me to join the Museum to create and run The Studio. Bill Gudenrath, Amy Schwartz, and David Whitehouse on
the opening day of The Studio.

We arrived in September 1995. We designed a facility while concurrently creating a program. We invited our artist friends and other well-regarded artists and teachers to join us. Our first summer sold out instantly and created long waiting lists. Paul Stankard, Lino Tagliapietra, Kristina Logan, Gianni Toso, and Susan Plum were among our first group of instructors. Each year we’ve added new programs and expanded techniques. We’ve hosted more than 100 resident artists and 20,000 students, and given 800 scholarships in our 20 years. 6,000 people have had group glassworking experiences and 60,000 individuals make their own glass each year.

A tight and devoted community has built itself around The Studio. We’ve helped develop emerging artists, and have supported well-established ones. People have found their passion in glass working at The Studio and have found each other—new friendships and love have blossomed in The Studio. Each year, we welcome 1,000 artists and students to study glassworking or to create their own work through intensive one- and two-week courses, weekend and evening workshops, artist residencies, and studio rentals. The staff is dedicated and talented; the equipment top-quality. And with the Museum’s collection and the Rakow Research Library’s resources at their fingertips, the Corning campus is a glassmaker’s paradise. 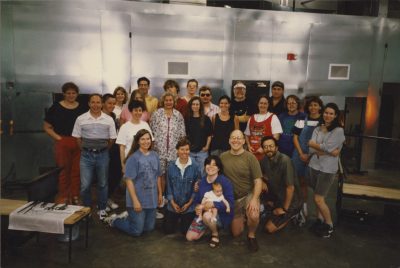 Amy, Bill, and their young daughter pose for a group picture with an early class at The Studio. 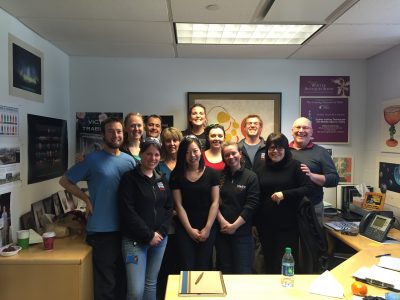 Amy, Bill, and the staff of The Studio today.

I knew I wanted to create something that was bigger than myself—a place that inspired excellence, where things were so well-run that artists and students could come and focus on the glass without having to worry about anything else. I wanted to create an organization that took each person seriously about their work; a place where people could find and develop passion and meaning. I especially love all the relationships that have developed at The Studio. They cut across age, ethnicity, gender, and profession. They are all about the glass.

Happy birthday to The Studio!