Opening this Saturday, April 23, The Corning Museum of Glass will present Revealing the Invisible: The History of Glass and the Microscope, tracing the invention and evolution of the microscope from the 17th century through the early 20th century, revealing scientists’ and artists’ explorations of the microscopic world. On view in the Museum’s Rakow Research Library until March 18, 2017, the exhibition will feature rare books and materials from the Rakow Library, interactive elements designed especially for the show, and historically significant microscopes—including a rare original Antoni van Leeuwenhoek microscope, lent by the Museum Boerhaave in the Netherlands, that has never before been exhibited in the United States.

Revealing the Invisible will explore how the evolution of the microscope motivated the development of modern glass science, and will look at the effects of microscopy on science, medicine, and popular culture. The exhibition will enable visitors to experience the process of scientific discovery from the time when the microscopic world was unimagined, to important scientific breakthroughs that expanded the known world, to examples of modern inventions that have put microscope technology within everyone’s reach.
“CMoG is the world’s premier institution for the study of glass, so we’re excited to present this exhibition that will illuminate a fascinating and surprising story about the history of science and of glassmaking,” said Dr. Marvin Bolt, CMoG’s curator of science and technology. “Revealing the Invisible will lead visitors through nearly 400 years of discovery that helped transform the way we see the world.” 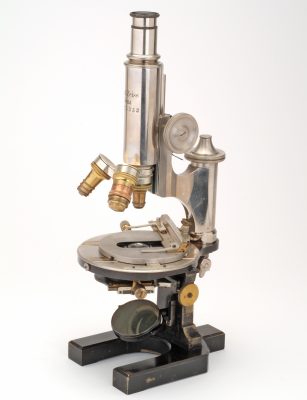 15 historic microscopes will be on display, including a rare original example by Antoni van Leeuwenhoek, the 17th-century cloth merchant who created the first microscopes that could reveal blood cells, bacteria, and sperm. The van Leeuwenhoek microscope, made 300 years ago, is one of fewer than a dozen of his instruments that have survived to the present day. The secrets of van Leeuwenhoek’s lens-making techniques are still not fully known. Alongside the original van Leeuwenhoek example, meticulously crafted replicas will enable visitors to handle the devices and experience this groundbreaking invention firsthand.

A rare first edition of Robert Hooke’s illustrated 1665 book Micrographia, which inspired van Leeuwenhoek and instilled widespread interest in the emerging science of microscopy, will show the start of microscopy’s role in popular culture. A digital version of the Rakow’s copy of Micrographia, created for the exhibition, helps visitors experience Hooke’s remarkable illustrated work. In addition, 18th- and 19th-century broadsides (posters) that advertise concert-like microscopy lectures will be on display alongside novelty microscopes featured in such shows, including an 18th-century solar microscope that projects an image of a microscopic object onto a wall.

The exhibition will also feature an original copy of Antonio Neri’s 1612 work, L’Arte Vetraria (or The Art of Glass), an explanatory manual on glassmaking techniques that took on new importance in the context of the Scientific Revolution and its emphasis on experimental investigation. The exhibition will illustrate how microscope technology developed in concert with improvements in scientific glassmaking including landmark inventions like Joseph Lister’s achromatic lenses from the early 1800s and a late-1800s German microscope with lenses incorporating the results of some of the earliest scientifically engineered glass made by Otto Schott, Carl Zeiss, and Ernst Abbe. Revealing the Invisible will also investigate connections between the microscope and public health, showing the tool’s importance for understanding microscopic creatures responsible for many deaths and diseases in the 19th century. Exhibition programming features select examples of modern microscope technologies, giving visitors the opportunity to use an iPhone microscope—a simple but powerful device created by attaching a standard laser-pointer lens to an iPhone camera. Stanford University’s inexpensive Foldscope—a paper “print-and-fold” microscope that has great potential to revolutionize global health, field-based citizen science, and science education, will also be featured.

Additional highlights from Revealing the Invisible include:

Read the article Revealing the Invisible: The History of Glass and the Microscope.