No one’s a big fan of airports, right? There are the crowds, the endless lines and the dull white-washed walls of never-ending corridors. However, there is one airport I wish I could have visited: New York’s Idlewild Airport during the 1960s. Why? To see how a stained glass artist named Robert Sowers (1923-1990) changed the face of one of the busiest international airports in America. Fortunately, the Rakow Research Library has Sowers’ archival collection and through his materials, I can transport myself back to the Golden Age of air travel to view this magnificent example of art in architecture. Several months ago, I helped a patron investigate the Robert Sowers Papers, which include design drawings, 3D models, research files, manuscripts, and paintings. Though the collection contains many wonderful items, there is one group of materials that caught my attention: the design models Sowers created for his 1960 stained glass window installation in the American Airlines terminal at Idlewild Airport (now known as the John F. Kennedy International Airport). Unfortunately, the stained glass window no longer exists; in 2008 it was dismantled and the terminal torn down during an expansion.

Sowers fabricated three different sized models of an abstract design he envisioned spanning the entire façade of the building. These intricate models show five distinct colors—blue, red, dark brown, and white—forming angular shapes. For the smallest model (2 x 20 in) he used acrylic paint to represent his design, but he constructed the larger models (6 x 41 in and 10 x 80 in) with multi-colored paper, assembling the pieces like a puzzle. At the time, using stained glass in a commercial building was rare. Luckily, documents in the collection explain why the architects constructing the new American Airlines terminal at Idlewild decided to incorporate stained glass into their design. These documents—such as press releases and articles—also illustrate what the air travel experience was like during the mid-20th century. 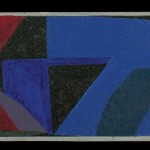 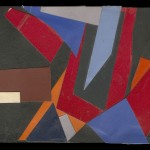 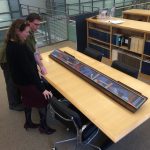 It was a time when air travel was considered to be a glamorous event. People dressed up to fly: men in suits and hats, women in skirts and stockings. Even with the advent of larger and faster jet-powered airplanes, flying remained a rare occurrence for the average person. Since a trip to the airport marked an experience in and of itself, it was essential that the terminals reflect the excitement of air travel. Instead of somber concrete blocks, the buildings needed to be welcoming and, above all, leave a lasting, glittering impression on visitors.

The architects, Kahn & Jacobs, envisioned a striking and impressive structure that combined art and architecture. The lead architect, Robert Allan Jacobs, had recently met Robert Sowers, whose abstract, structural approach to stained glass and innovative views on incorporating this art form into daily life impressed the architect. Jacobs commissioned Sowers to design a window that could extend the front of the building; three weeks later Sowers’ design models were approved for execution. When the American Airlines terminal officially opened in 1960, the window’s burst of vibrant colors and forms suggesting “the ever-shifting sensations of space and movement through space” awed travelers. Fun facts about the finished piece:

To find out more about Robert Sowers and the other projects he worked on come explore his archives at the Rakow Library. See our guide to the collection for more information.