For Pyrex, the 1980s was a period of product renewal and rethinking.

Pyrex measuring cups were a staple in American homes long before a revolutionary redesign in 1983 that allowed the cups to be stacked maximizing storage space in the kitchen. The groundbreaking design came from Dennis Younge, who at the time was a Senior Product Designer for the Consumer Products Division of Corning Glass Works. (Watch an interview with the designer.)

At the 1985 Symposium on Human Factors and Industrial Design in Consumer Products, Younge identified the challenges as: “1. Redesign these products, while maintaining market share. The new look could not be so radical that people would not recognize it as ‘My good old PYREX® Measuring Cup.’ 2. Maintain or improve the product’s performance for the consumer. 3. Maintain or improve manufacturing costs. The product was made in a complex 5-piece mold which requires constant maintenance during production.” The concept for the redesign came from a problem discovered while making 1-piece saucepans. When the saucepan was heat-treated, the handle sagged. While not an ideal shape for saucepans, it was a perfect solution to make more ergonomic handles on measuring cups, and ones that would stack as well!

Like all Pyrex ware products, the new measuring cups were sent to the Test Kitchen before release. Younge recalls that focus groups “started producing feedback the moment the respondents walked into the Test Kitchen and saw the proposed cups on the counter. Even before they had taken their coats off, they were handling the new cups and asking if they could buy them.” Based on these sessions, tweaks were made to the final design and, in 1983, the new measuring cups, along with a 2 quart Mix ‘N’ Measure Batter Bowl, were released. Pyrex liquid measures proved a success, with sales skyrocketing 150% over the previous year.

Even though Corning began producing microwave dishes in the 1970s, a Corning Micro-Wave Products brochure proclaims micro-wave products to be the “Lifestyle of the 80’s.” The same brochure states, “MICROWAVE – Corning makes the most of it…” Corning adapted much of its existing packaging to highlight the microwave-friendly nature of Pyrex, but they also debuted new product lines with shapes and sizes well-suited for microwave ovens. Pyrex’s “Bake, Serve, and Store” dishes were now marked microwave safe as well as oven and fridge safe. The package for the Pyrex® Brand Micro-wave ring mold dish declared the dish “especially designed for microwave and conventional oven use. Perfect shape for microwave – food cooks more evenly. Can be used in conventional ovens and for chilled desserts or salads.”

Microwave products, however, were not the only lines coming from the Pyrex brand. A Corning Glass Works booklet from 1984 shows these other product lines: Clear Elegance™ Ovenware; Servables™ Ovenware; Originals; Fireside™ Ovenware; Decorated Bakeware; and Serving & Storage Ware. This booklet clearly demonstrates a return to transparent Pyrex ware with Clear Elegance™, Servables™ and Originals. A variation was Fireside™ with a “rich, warm color” of a transparent brown. Fireside™ accessories included woven baskets and metal cradles with homey prints. 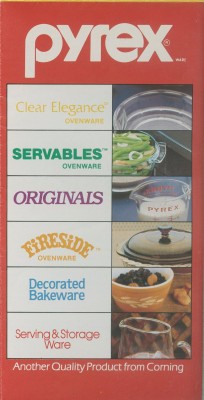 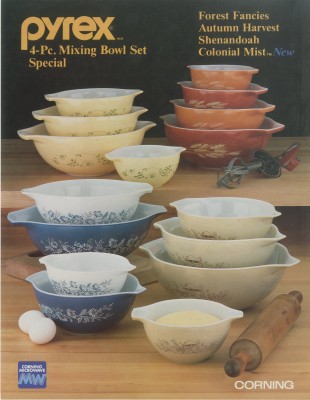