This watercolor design was created by Tiffany Studios’ ecclesiastical department for a nave window in All Saints’ Episcopal Church in Atlanta, Georgia. The proposal bears the name of Reverend Willis Wilkinson Memminger who served as rector at All Saints’ from 1910 until 1937. Though the drawing itself is undated, the installed window – with a slightly modified design – is inscribed with Louis C. Tiffany’s name and dated 1923. It is one of six Tiffany windows installed at All Saints’ during Reverend Memminger’s tenure – two others were installed that same year and three more around 1911. Religious figure windows such as these were among Tiffany’s most profitable ventures. The design itself features three long panels depicting the Adoration of the Magi: the three men stand before the infant Jesus as he is held by his mother Mary beneath the star of Bethlehem. “Approved by Louis C. Tiffany” is penciled in along the lower right edge of the mat board.

A proposal or design drawing such as this would have been one of the first steps in the process of designing a stained glass window. Once a client approved the proposal, Tiffany employees created a full-size cartoon and a pattern sheet; they would then cut the pattern sheet into small paper templates used to trace the design onto the glass.

The image below is of the completed window at All Saints’ Episcopal Church along with a detail view of Tiffany’s signature. 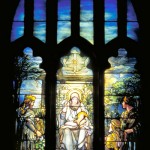 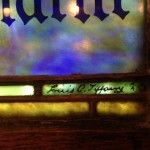 See the catalog record for this design.