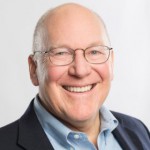 William Gudenrath is a glassblower, scholar, lecturer, and teacher. He is an authority on historical hot glassworking techniques from ancient Egypt through the Renaissance, and has presented lectures and demonstrations throughout the world. Resident advisor for The Studio, Gudenrath ensures excellence in the facility and its programs, and regularly teaches introductory and advanced courses in Venetian techniques. Earlier this week, the Museum released its first e-publication The Techniques of Renaissance Venetian Glassworking, authored by Gudenrath. It presents complete reconstructions of 35 objects with 360° photography and instructional demo videos. See the online resource at http://renvenetian.cmog.org.

Gudenrath demonstrates techniques he believes to have been employed by glassmakers of the past, and these are illustrated and described in a number of books and video segments including Chronicle: The Portland Vase (BBC-TVand A&E, 1989), Five Thousand Years of Glass (British Museum Press, 1991), Journey through Glass: A Tour of the Corning Museum Collection (The Corning Museum of Glass, 1992), and Master Class Series II: Introduction to Venetian Techniques with William Gudenrath (The Corning Museum of Glass, 1998). In addition, Gudenrath co-authored with noted glass scholar Dr. David Whitehouse several articles on the manufacture and ancient repair of the Portland Vase for the 1990 volume of the Journal of Glass Studies.

Gudenrath received degrees in music from North Texas State University and the Juilliard School, and is on the International Advisory Committee UrbanGlass in Brooklyn, NY. His works are sold in the Museum Shops, as well as other exclusive stores and galleries nationwide.

What has your involvement been with The Studio over the years? In 1995, my wife Amy Schwartz and I were invited by then director David Whitehouse and the board of trustees to design, build, program, and run The Studio of The Corning Museum of Glass. My title has been Resident Advisor from the beginning. I teach classes in glassblowing (and occasionally glass history) and help insure excellence in all aspects of The Studio’s operation. 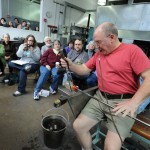 Bill Gudenrath demonstrates during a class at The Studio 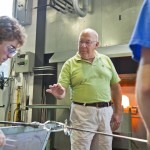 What do you like about working at The Studio? Working at The Studio is a dream because everything about it is mandated to be first-class—from the quality of the facilities and our selection of teachers, to the way we treat the staff and guests: it’s an exceptional place to be and work.

As The Studio celebrates its 20th birthday, what would you say about its effect on the glass community? I think that especially in the early years we helped other parts of the Museum learn the value of interacting meaningfully and personally with our visitors. When we arrived, the public was faced with objects in display cases, and somewhat limited didactic support alongside. The only possible interaction with staff was by chatting with the flameworking demonstrator or dealing with our famously helpful (then, as now) librarians. Now, along with periodic increases in the Museum’s footprint, the top-notch and frequent demonstrations and hands-on opportunities for our visitors have utterly transformed—brought to life, is perhaps not overstating it—The Corning Museum of Glass. Amy and I are immensely happy about any influence that The Studio has had, in this regard.