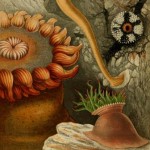 As a child, Philip Henry Gosse (1810-1888) was encouraged by his aunt, Susan Bell, to explore his interest in sea life. “When I found any specimen that appeared to me curious, or beautiful, or strange, I would take it to Aunt Bell, with confidence that I should learn something of its history from her” (Gosse, Edmund. p. 11). Aunt Bell also suggested that Gosse try to keep marine life, specifically a sea anemone, alive in a vessel of seawater. Years later, Gosse coined the word “aquarium” to describe the glass enclosures he created for marine life. He made aquariums fashionable with the publication of The Aquarium: an unveiling of the wonders of the deep sea (1854, full text); his popular work introduced a novel use of glass to the world, and inspired many in their own explorations during a period of growing public interest in the natural world. Gosse’s first serious attempt to make a “marine vivarium” consisted of putting about 3 pints of seawater with marine plants and animals into a confectioner’s show-glass window, which was about ten inches deep by five-and-a-half inches wide; by refreshing the water periodically, he was able to keep the inhabitants of the confectioner glass healthy for two months. He later perfected his technique in collaboration with Robert Warington, a chemist and a founder of the Chemical Society of London. Together, they developed the “aquarium principle,” in which plants in an aquarium would produce enough oxygen for animals to live. Gosse would later say that “Warington had invented the vivarium and he the marine aquarium.” (Gosse, Edmund. pg. 244) In 1853, Gosse and David William Mitchell, the first paid secretary of the Zoological Society of London, applied these principles to create the first public aquarium in the Regent’s Park Zoological Gardens (now known as the London Zoo). Gosse stocked the large glass aquarium with around 200 specimens of marine animals and plants. After the aquarium proved to be a very popular attraction, the Zoological Society expanded the exhibition, building additional tanks for Gosse to fill.

Following these successful efforts, Gosse began writing The Aquarium. The book, initially titled “The Mimic Sea,” documented his theories and practices of the marine aquarium and described in detail his work collecting specimens in Weymouth for the Zoological Gardens. Published in 1854, the book sold like “wild-fire.” The most successful of Gosse’s books, it started an aquarium fad and sparked widespread interest in the marine world. In 1855, he wrote a sequel, A Handbook to the Marine Aquarium.

While his work with aquariums was groundbreaking, Gosse is perhaps best remembered for his work as a naturalist and conservationist. Gosse spent countless hours observing life under his microscope. Edmund, his son, described his work habits in a biography: “He was up at five or six in the morning, and often spent eight or nine hours in uninterrupted work at the microscope, merely breaking through it so far as to come down from his study with knitted and abstracted brows, to swallow a hasty meal in silence.” (Gosse, Edmund. pg. 320) Gosse’s Actinologia Britannica: A History of the British Sea-anemones and Corals inspired many like-minded people to explore tidal pools, and his detailed and beautiful illustrations of sea creatures inspired other artists, including Rudolf and Leopold Blaschka, to document the natural world through their art. Gosse scoured tidal pools in his studies of marine life. His wife, Emily Bowes Gosse, who was an accomplished naturalist painter, often accompanied him. This illustration is one of twelve color plates in The Aquarium created by her (p. 42).

Adendum (05.06.2020): Current research indicates that Emily Bowes Gosse (1806-1857), wife of Philip Henry Gosse, was the artist behind the intricately detailed chromolithographs found in her husband’s book The Aquarium: an unveiling of the wonders of the deep sea (1854). A landscape painter in her own right, her underwater landscapes were significant to the success of the book, yet she remained uncredited for many years. The Corning Museum of Glass recognizes her incredibly valuable contribution.