Silvia Levenson believes her work is an expression of her soul. She uses glass not for its natural beauty, but for its potential as a narrative medium. Born in Argentina, Levenson has been living in Italy since 1981. She received the Rakow Commission Award from The Corning Museum of Glass in 2004 and in 2008 she was a shortlisted nominee for the Bombay Sapphire Prize. Her work has been exhibited around the world and is a part of the collections of The Corning Museum of Glass; New Mexico Museum of Art, Santa Fè; Fine Art Museum of Houston; Museo Rigaulleau, Argentina; and Musee Atelier de Verre de Sars Poteries, France.

What has your involvement been with The Studio over the years? I visited The Studio in 2004, when I received the Rakow Commission and I fell in love with it. The year after, I worked as an artist-in-residence, and was invited twice as instructor. What do you like about working at The Studio? Working at The Studio offers an incredible mix of possibilities. You have access not only to great facilities but you can visit the most wonderful contemporary and ancient glass collection in the world. On top of that, you can spend hours making research or just reading in the Rakow Library.

For me, working with glass is part of a creative process where knowledge, research and time are looking for a balance, and The Studio can be a perfect place for that.

As The Studio celebrates its 20th year, what would you say about its effect on the glass community? The binder of the glass community is the capacity of sharing experiences and points of views. I think The Studio is great not only as a place where we can learn and develop our own skills, but as a common space where we can shift boundaries and expand our creativity. For sure, the program of artists-in-residence, conferences, events, and the scholarships helps a lot in that. 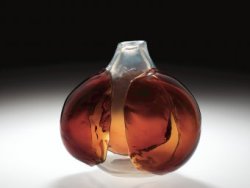