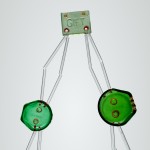 The 30th Rakow Commission: Tantric Object by Swiss studio jeweler Bernhard Schobinger, will be unveiled today at The Corning Museum of Glass.

Schobinger is recognized as a key figure of avant-garde contemporary jewelry, and his subversive approach to making spans more than 45 years, earning him a reputation for rebelliousness to innovation. In his work, Schobinger scavenges for materials that have nothing to do with traditional jewelry, such as shards of glass and pottery, colored pencils, spent underwear elastic, worn eraser nubs, nails, piano keys, and screws.

Tantric Object is made from the bottoms of old Swiss glass poison bottles, shaped like skulls. They are cut and decorated with gold lacquer. The end plate displays the molded word “GIFT,” which has a double meaning: in English, gift means “a present,” and in German, it means “poison.”

See the new work on display this evening during a Behind the Glass lecture by guest speaker Ursula Ilse-Neuman, who will discuss Schobinger’s work, as well as the history of glass jewelry and concepts in contemporary glass jewelry. The event will take place in the Museum’s auditorium from 6-7 p.m.

Recently-retired senior curator of modern and contemporary glass, Tina Oldknow, selected Schobinger for the commission because of his “unconventional world view,” and “aim not to cultivate a purist attitude toward poor materials, but to work, almost alchemically, on creating blends of materials in particular proportions.”

Tantric Object is based on a belief in Tantric Buddhism, Schobinger says, where necklaces made from skulls are symbols of emptiness and of the illusion of reality. The necklace he created is a contemporary expression of that emptiness. “Only one other jeweler has ever been recognized with the Rakow Commission,” said Karol Wight, president and executive director of The Corning Museum of Glass. “The fact that Schobinger was chosen this year is a testament to the importance of his exploration of discarded materials as a means to challenge the conventional histories of body adornment. Tantric Object will generate a conversation about the reuse of discarded materials to create provocative works of unexpected beauty.”

Schobinger’s Tantric Object will be the first addition to the Contemporary Art + Design Wing since it opened in March. Next to the new work will be Glassfly Ring, which Schobinger gifted to the Museum. It is composed of a found glass bottleneck and two commercial eyeglass lenses that serve as the fly’s wings, as well as Akoya pearls that form the eyes. Also new to the display will be four other contemporary adornments including Black Magic Necklace from American jeweler Biba Schutz, Yom HaShoah Ritual Sash made by Australian artist Blanche Tilden, Steinhaufenring (Stone-Pile Ring) by German artist Karl Fritsch, and Constellation by American artist Kristina Logan.

Inaugurated in 1986, the Rakow Commission is awarded annually to artists whose work is not yet represented in the Museum’s collection. The commission supports new works of art in glass by encouraging emerging or established artists to venture into new areas that they might otherwise be unable to explore because of financial limitations. It is made possible through the generosity of the late Dr. and Mrs. Leonard S. Rakow, Fellows, friends, and benefactors of the Museum. Each commissioned work is added to the Museum’s permanent collection and is displayed publicly in the Museum’s galleries.