The Corning Museum of Glass has named Swiss studio jeweler Bernhard Schobinger as the recipient of the Rakow Commission in 2015.

Recognized as a key figure in avant-garde contemporary jewelry, Bernhard Schobinger’s subversive approach to making spans more than 45 years and has earned him a reputation for rebelliousness and innovation. By denying his jewelry its function as a status symbol, he uses it as a vehicle for social expression, such as when he links diamonds with objects that may have been retrieved from the garbage, a gesture that brands their glitter, too, as the detritus of a throw-away society.

“It is not often that a jeweler is recognized with the Rakow Commission. Schobinger’s unconventional world view is one of an artist rather than a jeweler, his work extending into the realms of sculpture, photography, and performance,” said Tina Oldknow. “Schobinger does not focus exclusively on discarded materials. Rather, he works, almost alchemically, on creating blends of precious and poor materials in particular proportions.”

His creative process starts with gathering things, meaning both picking things up and keeping them. The reason for gathering an object may be that it possesses an interesting formal quality or material property, but it might also impart a particular symbolism. For Schobinger, it is qualities like these, rather than intrinsic “value,” that make an object worthy of being transformed. The gathered things are the materials from which he starts. He then processes them, cutting, drilling, linking them with other found objects, or combining them with precious materials such as platinum, tantalum, or black diamonds. 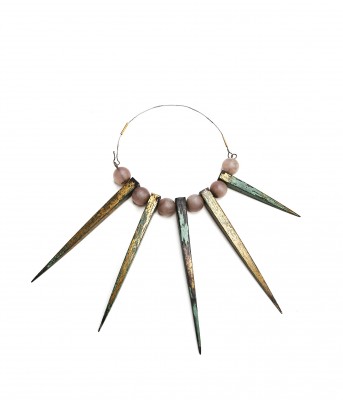 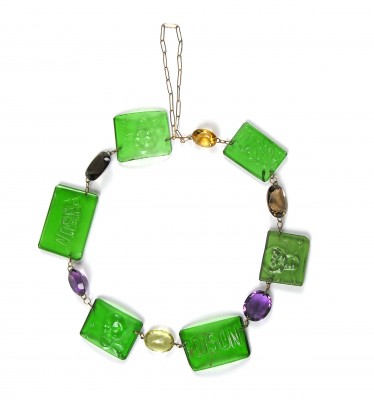 “The progress of work carried out in the workshop is marred by instability, a fragile state of mind constantly oscillating between euphoria and resignation, acceptance and rejection,” said Schobinger. “Love and curiosity as well as anger and aggression can be the motivating forces driving excursions into the last blank spaces on the map of the aesthetic world, which may lead either to discoveries or shipwreck.”

Schobinger began his studies at the Zurich Kunstgewerbeschule (School for the Applied Arts) in the early 1960s. The prevailing climate was one of rebellion and confrontation. The early avant-garde movement Dada, which originated in Zurich, was rediscovered at that time, and became the subject of a lively international discourse.

Aware of Dadaist text collages and witty puns and plays on words, as well as Surrealist ideas of design and invention, Schobinger was inspired by the Swiss artist Franz Eggenschwiler (1930–2000) to make use of materials that had nothing to do with jewelry, such as shards of glass and pottery, nails, piano keys, screws, and curtain rods. Combining these seemingly worthless bits and pieces with precious metals and stones, Schobinger—like the Dadaists—cultivates calculated coincidence rather than free fall. The results are objects of often bizarre, archaic, and symbolic radiance and power.