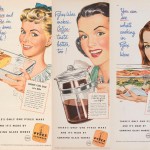 Just as the Great Depression was drawing to a close, World War II was beginning. The economy had little time to rebound, and the Pyrex philosophy of “Bake, serve, and store all in the same dish” became even more a necessity. American consumers had to keep their purse strings tight, only buying the most efficient products. In addition to its popular dishes, Corning Glass Works produced many products to support the war effort, like Pyrex glass irons and wooden instead of metal handles. If you’d like to read more about these and other Pyrex products Corning Glass Works produced during World War II, read Whitney Birkett’s post, “Pyrex on the Home Front”.

The 1940s were also a time of great innovation for Corning Glass Works and the Pyrex brand. Corning Glass Works had merged with Macbeth-Evans Glass Company in Charleroi, Pennsylvania in 1936 and began experimenting with the Macbeth-Evans formula for opal glass, eventually developing it into durable messware for the military. This opal messware was so strong that Sgt. Harvey Littleton, son of the original Pyrex pioneers Jesse and Bessie Littleton, earned some extra cash betting his army buddies $1 that he could throw the glass dishes against the wall and they wouldn’t break. Thinking past the war, staff from the Home Economics department spoke with wholesale distributors and food managers in cafeterias across the country to get their thoughts on future opal dinnerware for restaurants and hotels. For the home, the first set of colored Pyrex opalware was introduced in 1945 in the form of the primary color mixing bowl set. The test kitchen’s Lilla Cortright was instrumental in the research and development of a stacking set of refrigerator and oven dishes released two years later, also in primary colors. Prior to their release, test kitchen field agents distributed prototypes in a small Pennsylvania community and interviewed users to identify what needed tweaking. Cortright focused on adjusting capacity for common foods like a pound of butter, the best size to fit the average hand, and a design for invertible lids that would allow for stacking. The dishes weren’t the only thing getting the color treatment. Pyrex advertisements began to roll out with vibrant illustrations. Oskar Barshak, a Russian immigrant working in New York City, was one of the print-ad illustrators responsible for these ads featuring the ideal homemaker and her cornucopia of Pyrex dishes that made her tasks simpler and more enjoyable. These images heralded a post-war focus on the home and traditional family values that would continue into the 1950s.