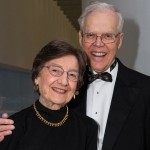 Paul and Elmerina Parkman have been coming to The Corning Museum of Glass since the early 1970s, when they first began collecting American Studio Glass.

“We like to learn,” says Paul. “When my mother died, she passed on to us several pieces of antique glass. We made a list of the glass and began researching.”

Around the same time, Elmerina saw an ad in the local paper for a woman offering classes about glass in her home. She went, and began to learn about glass of different time periods reflected in the woman’s collection.

“It was wonderful,” she recalls. “But it was when I saw a contemporary piece by Dominick Labino that I really got excited.” The idea of collecting work by contemporary artists appealed to the Parkmans. “We felt we ought to have the courage to live within our generation—to buy and collect things made today,” says Paul.

The Parkmans became active in learning about and supporting craft. Over the years, they have been founding members of the Art Alliance for Contemporary Glass and the James Renwick Alliance. Elmerina was also a member of the Maryland Craft Council, and now serves on the Advisory Council of The Textile Museum in Washington, DC.

“Glass is what really appeals to us, though,” she says.

Over the years, the Parkmans have donated Studio Glass works like Architectural Symbol (1975) by Robert Willson and Teapot Goblet #83 (1989) by Richard Marquis to The Corning Museum of Glass as well as catalogs, periodicals and other materials to the Rakow Library, which has been an important resource to them. 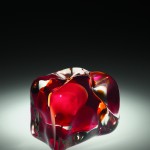 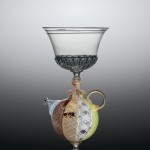 Recalling great moments in their relationship with the Museum, Elmerina cites the exhibition New Glass 1979 and the Glass Art Society (GAS) Conference held in Corning the same year as “a big event in our lives. We met Harvey Littleton and it was thrilling.”

Paul recounts working with the curator of 20th-century glass, William Warmus, in the early 1980s on a show about Emile Gallé’s glass. Paul is an expert on infectious disease, whose work led to the development of the rubella vaccines. “Bill asked me to help him to interpret some imagery on the Pasteur Coupe (named for Louis Pasteur),” he says. It was a truly unique opportunity for him to merge his interests in medicine, history, and glass.

From the time they first began to interact with staff members in the 1970s to the most recent opening of the new Contemporary Art + Design Wing, the Parkmans feel that the Corning Museum has been something wonderful in their lives, a place that is special to them, but also makes them feel special.

“It’s clear everyone is pulling in the same direction,” says Paul. “We are so proud to be a part of it.”