Many artists have been inspired by the patriotic colors and symbols of the United States of America. In honor of this weekend’s holiday, we’ve compiled a list of the top 10 glass objects to celebrate a patriotic Fourth of July. See the Set in the Collections Browser.

10. Pyrex mixing bowl in Federal Eagle pattern
The classic symbol for freedom, the eagle flies high over our sweet land of liberty. And in this popular Pyrex pattern, Federal Eagle, freedom comes to the American kitchen—and lots of Fourth of July picnics! What Pyrex pattern are you? Take our quiz!

9. Coonley Playhouse Window or Kindersymphony
Architect Frank Lloyd Wright once said that these windows were inspired by parades, and indeed, images of balloons, confetti, and waving flags come to mind. Can you spot our Grand Ol’ Flag? 8. Plate and Goblet in “Liberty Bell” Pattern
Let freedom ring! The iconic symbol of American independence, the Liberty Bell is prominently displayed on this cup and plate, commemorating the signing of the Declaration of Independence, “100 Years Ago,” as imprinted in the glass. Made in 1876, the plate shows the names of the thirteen original states. 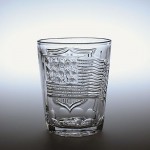 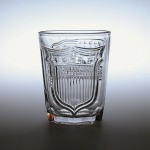 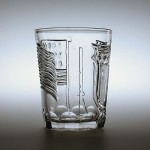 6. Campaign Tumbler
This pressed glass tumbler shows an American flag on one side and a shield with stars and stripes on the other. A vertical rifle opposite the flag pole hides the seam lines made by the mold. 5. Roundel Showing Columbia With Eagle and Liberty Cap
This is an interesting example of Bohemian glass made for the American market in the mid-1800s, although it’s not really known why. Perhaps for a parade? Columbia, or the “Goddess of Liberty”—derived from Christopher Columbus—was frequently shown with a Liberty Cap. The eagle, of course, was a symbol of the new country. 4. Murrina with American Flag
O say can you see? Canes of colored glass come together to create our Star-Spangled Banner. 3. Stars and Stripes Acid Capsule #4
Created by Richard Marquis, famous for his glass caneworking, this subversive statement piece was Marquis’ foray into Venetian glassworking techniques, after spending time at the famous Venini glassworks on Murano. 2. Patriot Divided Core Chevron Swirl with Silver Mica
Swirling ribbons of red, white, and blue glass combine to create a display reminiscent of the dazzling fireworks that fill the skies on the Fourth of July. 1. The Man Who Would Not Be King
This large marble brings together symbols of the beginnings of our country: early American flags and busts of Founding Father George Washington.

And in case you missed it, 5 Glass Objects that Celebrate Summer.