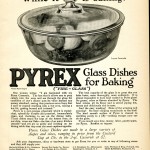 The story of Pyrex begins with an industrial glass company, the manufacturer of battery jars, light bulbs and other utilitarian items. Corning Glass Works was looking for new products to develop for its Nonex glass, a heat-resistant glass Corning had developed for use in railway lanterns and other industrial products. In the past, lanterns would often shatter when the warm glass hit the cold outside air. Broken signal lanterns could lead to train accidents or near misses. Nonex, however, was especially resistant to sudden changes in temperatures and Corning Glass Works, fresh from success with railroad lanterns, was looking for other markets for this glass. One of the scientists working with this directive was new-hire Jesse T. Littleton, a physicist with a degree from the University of Wisconsin. Jesse and his wife Bessie were discussing the challenge over dinner one evening, when Bessie said her ceramic Guernsey casserole dish had shattered in the oven, after only two uses. She wondered if Nonex might be a better material for baking and asked Jesse to bring her a piece of glass to try. The next day Jesse came home with the sawed-off bottoms of two Nonex battery jars. Bessie used one to bake a sponge cake that was evenly cooked, easy to remove from the glass container, and baked faster than was typical with a metal or ceramic dish. Bessie continued to test Nonex, trying out different recipes, different sizes of glass (custard cups made from lamp chimney tops!), carefully recording her results. You might say that Bessie’s kitchen was the first test kitchen Corning used to develop Pyrex for the market. Several years after Bessie’s experiment and a bit more tinkering, Corning scientists Eugene Sullivan and William C. Taylor patented a glass formula safe for cooking. Corning Glass Works began selling its new product, called Py-rex. According to company accounts, the name was selected for the nice way it rolled off the tongue and meshed with Corning’s tradition of using “ex” on its glass formulas. However, early ads have “fire-glass” printed beneath Pyrex, showing that Corning was at least partially “playing with pyre.” 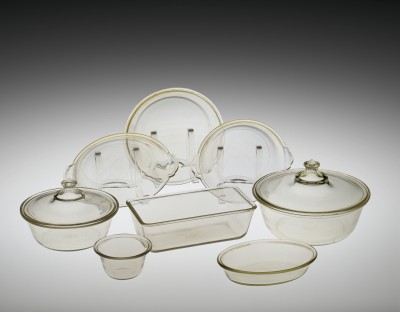 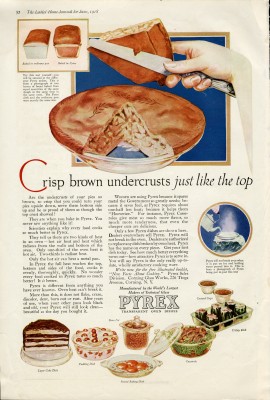 Now Corning had a new product, but how to convince American cooks that using glass dishes wouldn’t result in a shattered mess in the oven? To do this, Corning turned to a new authority in American households ­– the home economist. Women like Sarah Tyson Rorer, founder of the Philadelphia Cooking School, and editor of the influential Ladies’ Home Journal, began testing Pyrex in their kitchens. Their endorsements were highlighted in ads, cookbooks, magazines and newspapers and helped convince dubious consumers to try the new, transparent ovenware.

First sold in hardware stores, Pyrex was soon available at department stores and marketed to the modern cook who valued efficiency, beauty and economy. The shorter cooking time required by glass was an important selling point for a country focused on saving valuable resources for the war. And by 1920, Pyrex was beginning to find its place in kitchens all over America. 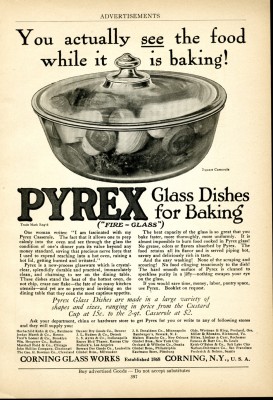 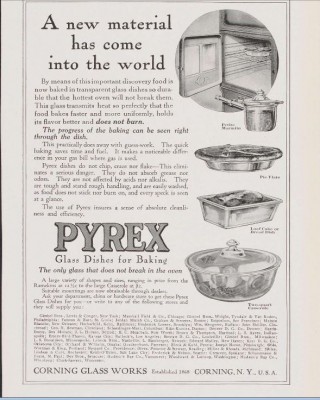 Interested in learning more about Pyrex? Check out our exhibit, America’s Favorite Dish: Celebrating a Century of Pyrex, opening June 6, 2015, at The Corning Museum of Glass.