One of my favorite items in Selections from the Rakow Library, Leslie Nash’s notebook, has a story full of artistry, secrecy, and human drama. Leslie Nash was a glassmaker who worked for Louis Comfort Tiffany during the first decades of the 20th century. His father, Arthur, was also a Tiffany employee, and is perhaps best known for creating Tiffany’s famed favrile (or iridescent) glass. Arthur kept his recipe a secret – supposedly even from Tiffany – only sharing it with Leslie in 1909, a year after Leslie had taken over the direction of the blown glass department from his father.

Leslie records the event in his notebook: “my Dad called me into his office – locked the door and said – Leslie I’m going to tell you a secret that no living person knows except your brother Douglas.” Leslie goes on to describe Arthur’s experiments and his own modifications of the formula for what he called lustre glass. Of his own work on the recipe, he writes, “Strange as it maybe [sic], I personally had to be present during the making of lustre glass – and outside of my father no living person has ever had one bit of information on the work I performed for him.” While Tiffany appreciated, and certainly benefitted from the Nash family’s work, Leslie records, “[Tiffany] never gave me credit for my inventions – it always was Tiffany glass Ha Ha – but my Dad will come into his own some day for the years of research he did on the invention of irridescent [sic] glass.” 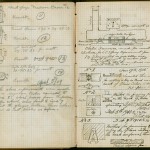 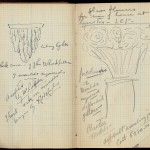 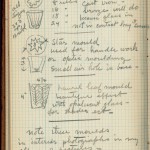 Leslie left this notebook and others to his descendants, warning them to keep them safe as “Some day these formula[s] may prove to be of great value.” Nash’s notebook is full of experiments, sketches, recipes, and notes revealing his relationship with his father, brother, and Tiffany. The pages are covered in pencil and ink, and some even bear traces of what may be paint. The book was probably started by Arthur, possibly as far back as 1894. Leslie kept the notebook in the family and wrote in it as late as 1947, noting the availability of #37 (uranium) due to atom bombs. The notebook was passed down through the family, along with the rest of Arthur and Leslie’s papers, until it was acquired through a 2004 auction by the Rakow Library. Read more about the Nashs, Tiffany, and favrile glass.