Two artists relatively new to the world of glass are at The Studio this month to experiment with and further develop their love for this fascinating material. Livvy Fink and Shari Mendelson during their residencies at The Studio.

UK-based artist Livvy Fink is completely captivated by the idea of capturing “frozen moments” in glass. For her, it’s all about what lies beneath the surface, drawing inspiration from the depth and volume of glass. Having long worked with mixed media—both studying and teaching—she’s no stranger to the casting process, but after a trip to the Czech Republic, she developed a passion for glass, and found she was intrigued by glass casting.

“I’m quite mystified by glass,” Fink said. “It feels like it’s alive, and you can capture it. (The final piece) would have been different if you had stopped the kiln sooner or later. You’ve captured a frozen moment.” 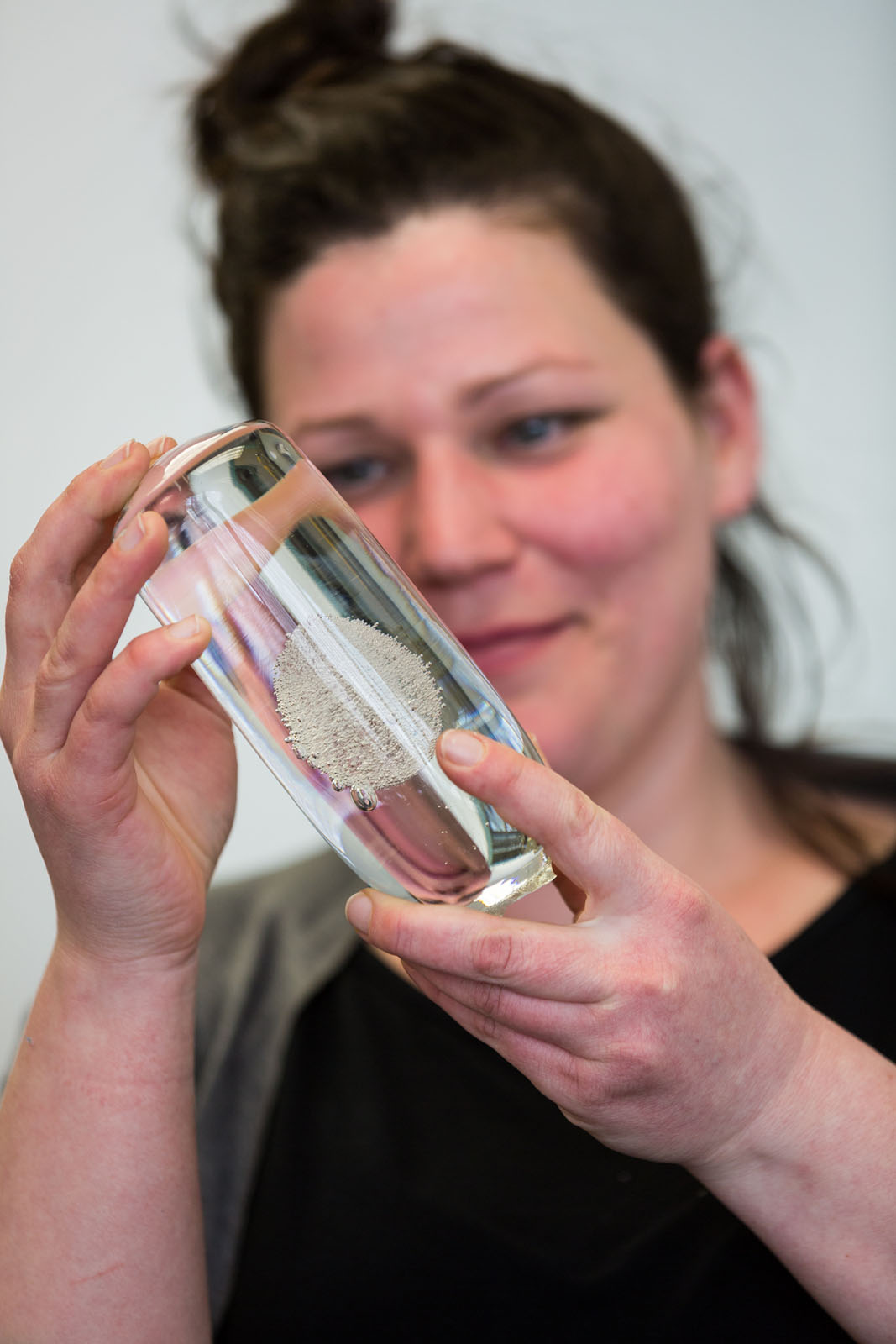 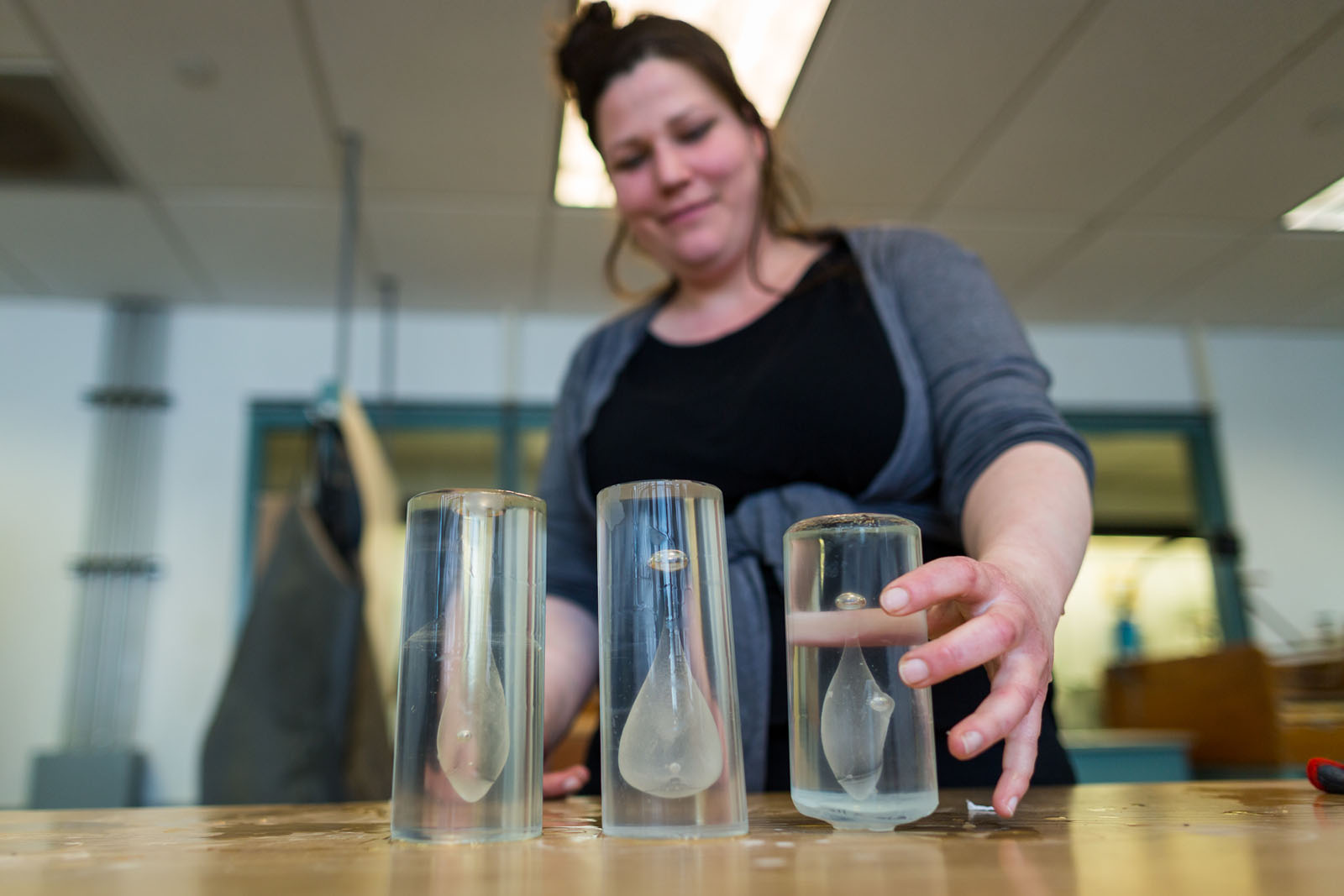 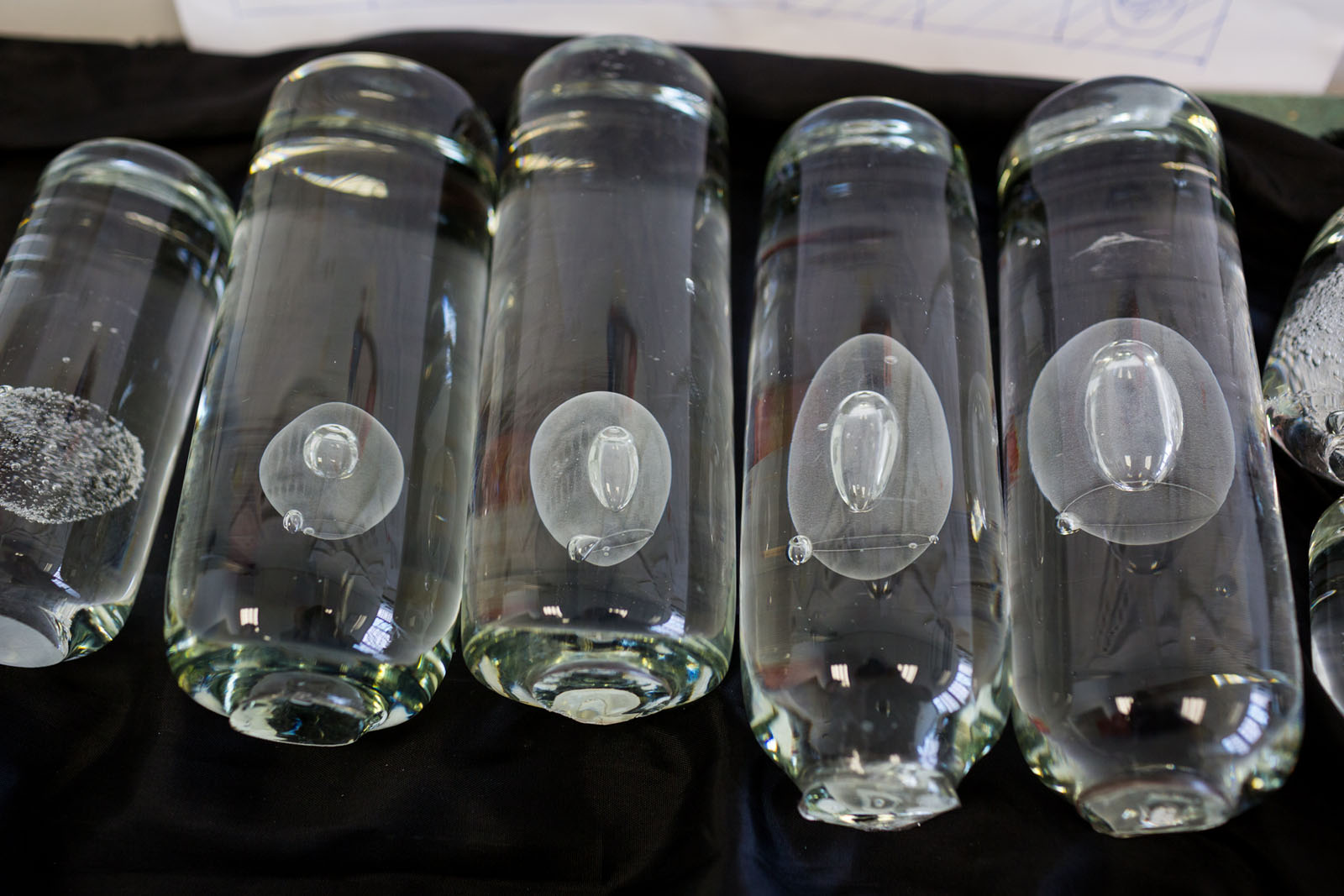 Some of the pieces made during Fink’s residency.

While at The Studio, Fink worked on a series of glass cylinders containing a bubble. Her goal was to examine the effect of time, temperature, and density on the glass, and how it impacted the movement of the bubble while it was in the kiln.

Fink has recently been involved in a year-long project that came out of her desire to further understand what people saw in her work. While exhibiting an installation, she talked with people about what they saw—about 50% of onlookers saw cellular structures, while the other half saw galaxies. Livvy Fink’s cast glass, hot poured to catch reaction of gas given off from the mold, producing larger bubbles.

“I liked how my work sparked imagination and a whole new dimension,” she said. “I became fascinated by the way it was almost equally split.”

A few months later, she was listening to the radio and heard an astrophysicist from the University of Cambridge Institute of Astronomy talk about the work he was doing in conjunction with oncologists from Cancer Research. She knew she had to be part of it. Through an award from the Welcome Trust Foundation, Fink collaborated with Cambridge to draw attention to their project by creating a series of new works “exploring how the imaginary space within a glass object can illustrate how both the hidden worlds of outer space and of the cells within our bodies are linked through a shared sense of wonder,” she said. Fink’s residency marks her first trip to the United States, and she couldn’t be more thrilled that her destination was The Studio of The Corning Museum of Glass.

“It’s been amazing,” she said. “Mainly, it’s just the greatness of the people who work here. You feel so totally supported. The enthusiasm has been very inspiring, and it’s a great environment to be in.”

Fink has also found inspiration in the incredible glass collection right across the parking lot from her workspace.

“So many of the pieces I’ve seen in books are all there,” she said. “It’s an amazing moment, seeing them in person. They look so different in the flesh. I can’t believe that it’s all here in this one bit of the world, and that if I have a spare hour, I can just run across the parking lot and see them!”

Shari Mendelson: Recreating the Past

Shari Mendelson draws inspiration from the past. Using found plastic bottles, she creates small sculptures inspired by ancient Greek, Roman, and Islamic glass and ceramic vessels, as well as animal artifacts. She has been doing this for six years—and is just starting to branch out into glassmaking.

Mendelson’s visiting artist fellowship at Brooklyn’s Urban Glass last summer was her first foray into glassmaking, starting with a ten-week glassblowing class. She then experimented with making molds of her plastic pieces, and turning them into a series of mold-blown vessels with the help of glass artists. She continued this work, with a special emphasis on Roman and Islamic mold-blown glass, during her residency at The Studio this month. Shari Mendelson’s glass work prior to coming to The Studio.

“While looking at ancient works I think about what they were used for, the people who made them, and what the culture of their time was like,” Mendelson said. “I think about the great civilizations that have risen and fallen and what the remaining objects of our time will say about us to future civilizations.  My favorite objects act as a touchstone for a sort of time travel. They offer a visceral connection to the maker—the years between a first-century glass vessel and today melt away.”

Several years ago, Mendelson came to The Corning Museum of Glass to look at the ancient works, and found herself completely inspired. She took dozens of pictures, which she continues to reference for her work today. 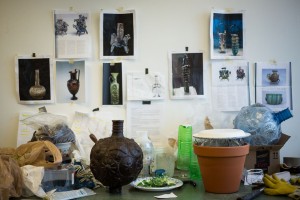 Shari Mendelson’s wall of inspiration while at The Studio. 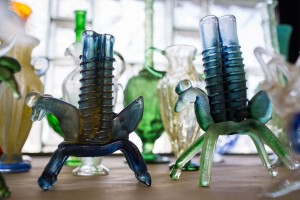 Some of the pieces made during Mendelson’s residency.

“We stayed until they were ready to kick us out,” she said. “I loved every bit of the museum, and I began to get the inkling that maybe I could do this. Ever since, I’ve been thinking about how I could come back to spend some more time here.”

During her residency, Mendelson has had the opportunity to experiment with many different designs in ancient glass, working with gaffers to see if they can replicate work made thousands of years ago.

“It’s been absolutely tremendous,” she said. “There are so many skilled people here, and I’ve been able to absorb so much. I’ve been working at such a breakneck speed. I’m excited to take these pieces back to my studio and spend some time with them to really process all I’ve learned.” 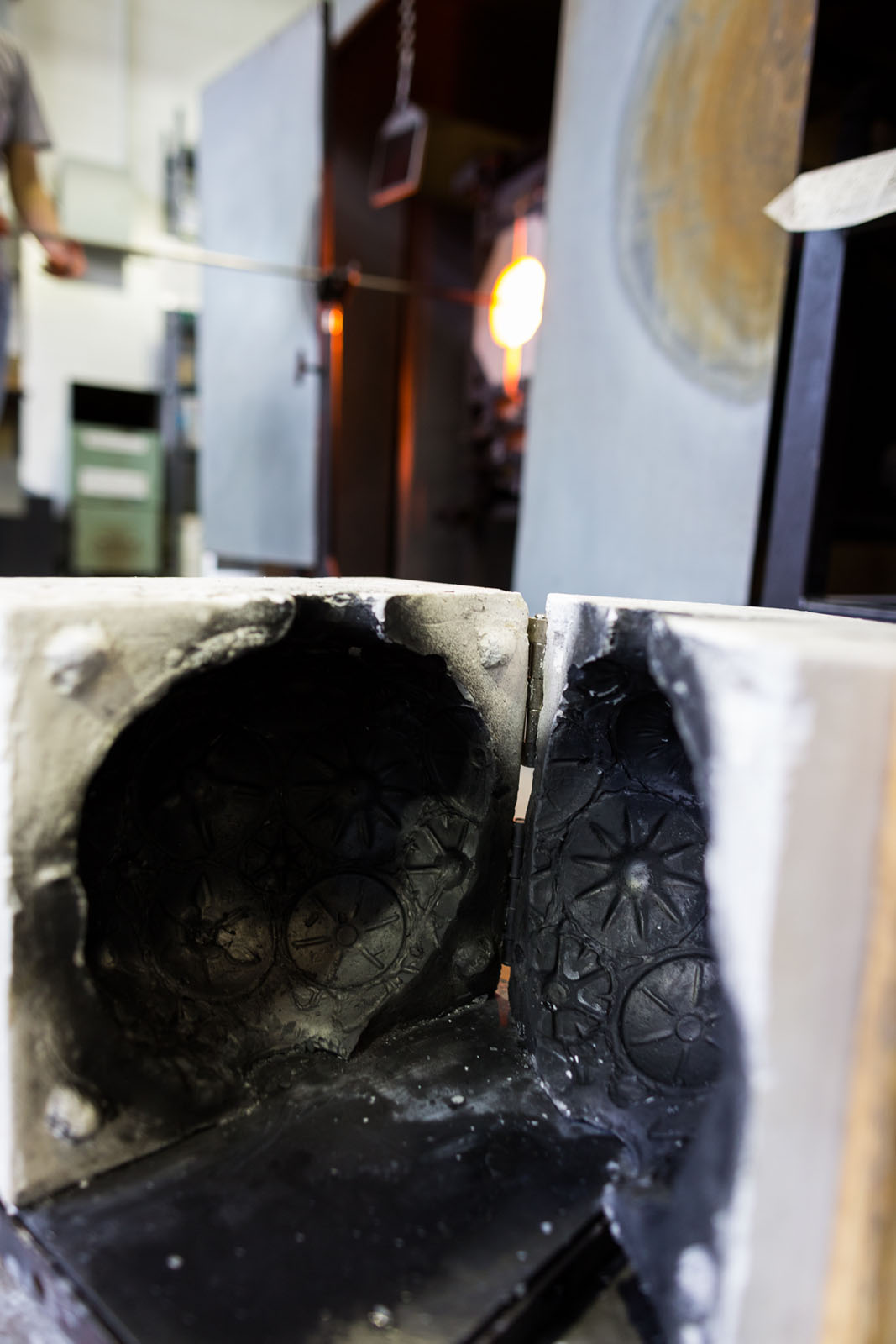 One of Mendelson’s molds. 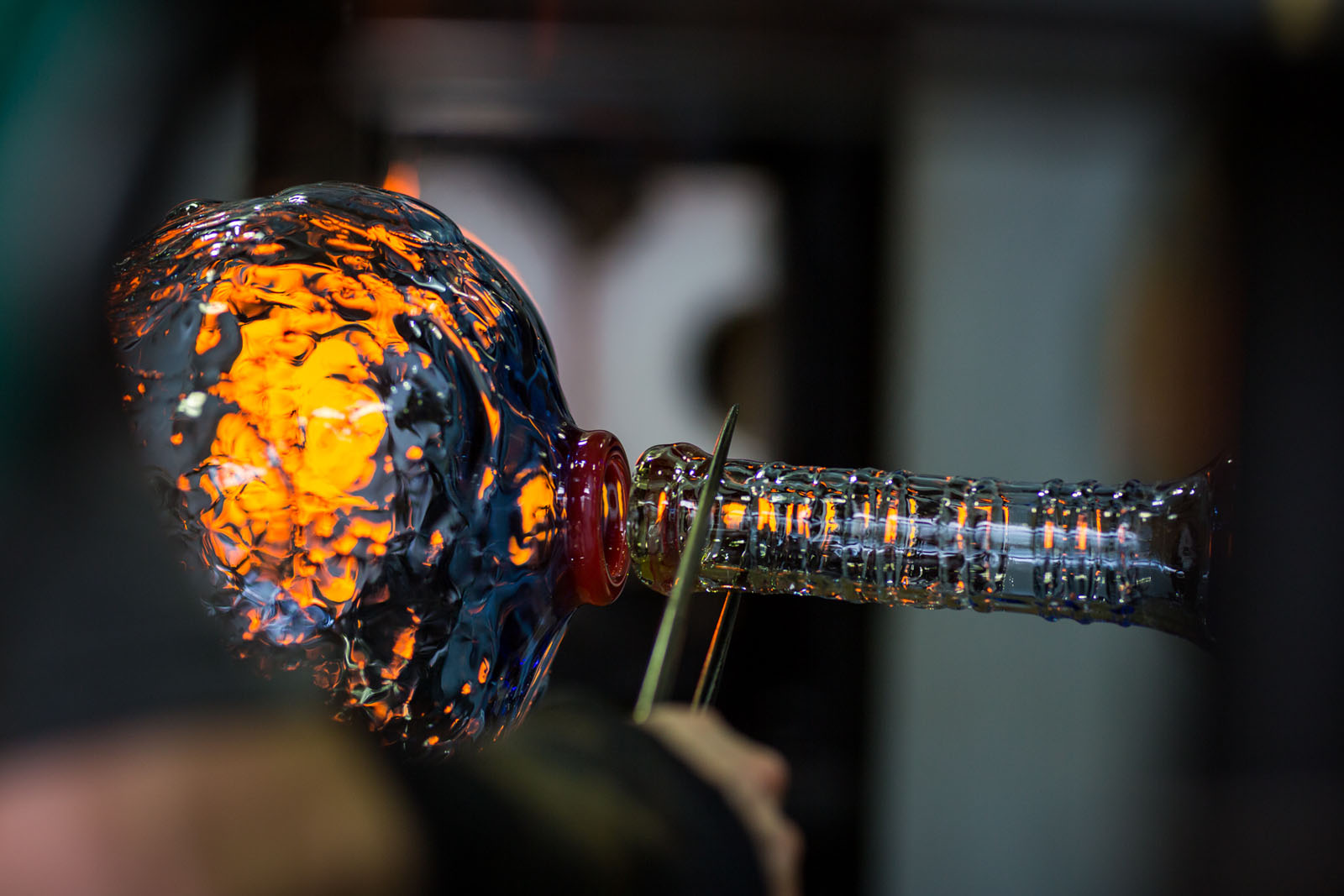 A piece made during a session in the hot shop. 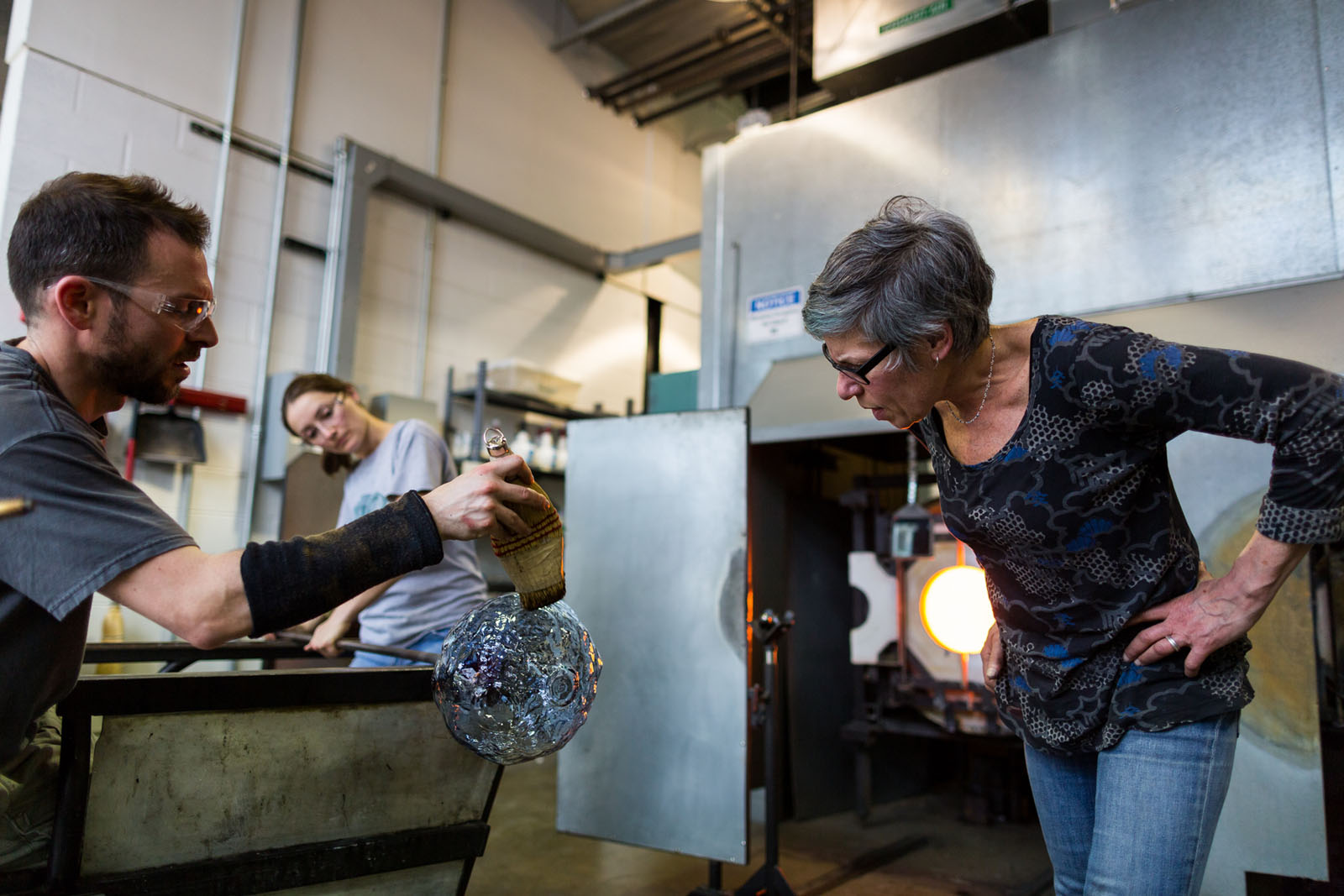 Mendelson studies the work being made.

“I like combining glass and plastic,” she said, “because I think it helps bring attention to the fact that plastic bottles—as these ancient vessels once were—are the symbols of our time. They’ll be our trash to future generations. I wonder about our place in history, and ancient art helps me put our time in perspective.”

Both artists will present a free public lecture to discuss their residencies this Thursday at The Studio from 12-1 p.m.