A week after opening the Amphitheater Hot Shop in the new Contemporary Art + Design Wing, Museum gaffer Don Pierce is retiring. It has to be a bit surreal—leaving the new hot shop in the same place he used to blow glass for Steuben. But Don has seen the Hot Glass Show grow from the very beginning, and leaves knowing that what he helped create is prospering. Don got his start working with glass in Corning Inc.’s factories in 1973. He then moved to Steuben in the early 80s to go through the apprenticeship program to become a gaffer.

“When I worked in (Corning’s) A Factory, it was all commercialized glass—laboratory glass, bottles, and beakers,” he said. “Steuben was all about artistic craft. We were making animals, bowls, and vases for people. It was a place to hone your skills and create beautiful pieces of glass.”

In 1996, The Corning Museum of Glass began talking about creating a space for live hot glass demonstrations as part of the Museum experience. Don, along with seven other Steuben gaffers, applied to help get the Hot Glass Show off the ground. “I thought it would be a unique thing to get into—being able to work in front of the public,” he said. “We all had to come over and try out for the job. We made glass in this makeshift little shop where we had raw materials and a couple of blocks. There was no annealer or glory hole, and only one furnace. I was lucky enough to get selected.”

“We started in a basic little shop behind the 200-Inch Disk,” he said. “Then we had an inside show over Steuben. Then we built the Roadshow and went to the Olympics. Then we had GlassLab. Then we were blowing glass on Celebrity Cruises. Then we had the Courtyard Stage and the Innovation Stage. And now the Amphitheater Hot Shop. 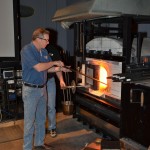 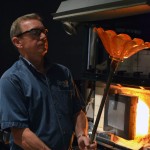 “I’m stepping away a week after the opening knowing we’ve created something incredible,” says Don. It’s been amazing to watch the expansion of the Hot Glass Show over the last 19 years.”

And so, Don’s time on the Museum campus has come full-circle, right back to the Steuben blowing room where he learned to become a gaffer.

We took a space that’s been used to make amazing artistic pieces since 1951, and turned it into this big amphitheater that’s still marching on,” Don says. “It says a lot for the Museum and the Hot Glass Show to be in this space. It’s still growing.”

Although he may be retiring, Don won’t be hanging up his glassmaking tools just yet.

“I love to blow glass, and it’s not something you walk away from and don’t do anymore,” he said. “I still have all my Steuben tools, which have been in a box for 15 years. It’s about time to get them out and dust them off.”