Our Special Temporary Projects Gallery went from empty to fully installed this week. Granted there’s only one piece in it, but it is the first ever, room-sized installation for The Corning Museum of Glass. Constellation by Kiki Smith is a meditation on the infinity of space and the human desire to understand it. It’s a way to bring the heavens to earth—represented in 26 hot-sculpted glass animals placed on handmade Nepal paper, dyed indigo. The night sky somehow comes to life in the gallery, ironically, lit by daylight. 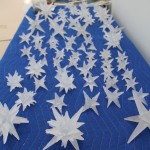 The many hot-sculpted stars are ready to be placed. 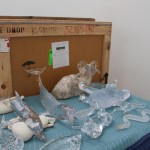 Some of the animals wait to find their home in the sky.

Kiki Smith is an American artist who works in a variety of media including jewelry, printmaking and sculpture. Like many of the artists featured in our Contemporary Art + Design Galleries, Smith comes to glass from the outside, working with a master glassworker to realize her vision in a new material. Inspired to create the piece after studying a 19th-century celestial atlas, Smith partnered with Venetian maestro Pino Signoretta to make the glass components of Constellation. 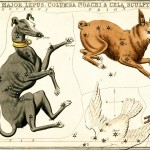 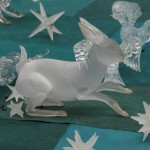 Kiki Smith’s version of Lepus, the hare, in glass.

The installation team had the difficult—yet incredibly fun—task of filling the indigo night sky with stars. Oriented so that the northern sky appears in the northern section of the gallery, the team followed two star pattern maps to place the objects.

The glass animals based on constellations include Ursa Major and Minor (Greater and Little Bear), Scorpius (the scorpion), Aries (the ram), Cancer (the crab), and lesser-known star patterns, such as Corvus (the crow), Lacerta (the lizard) and Delphinus (the dolphin).

The Special Temporary Projects Gallery wasn’t the only space in the new wing overrun with animals this week. Sitting in the annealers of the Amphitheater Hot Shop were a salmon and a sea turtle, made by Raven Skyriver who happened to be in town for the February 2300°. In the next annealer over were giant ants being made for the Ladd Brothers’ performance during opening weekend. The hot shop was literally crawling with activity.

Ants, for the Steven and William Ladd, used to represent something negative in their lives—a childhood memory they’d rather forget. But now they think of an ant colony as a swarm of support, from people who have collected their work, supported their creativity, and have generally been an influence in their lives. The tiny beaded ants they generally make are being transformed on our hot glass stage for a special 2300° show on Saturday, March 21, as part of the Grand Opening Weekend, where they will symbolize an ant colony that works together, cares for each other, and strives to achieve a common goal. And that’s exactly what our new Amphitheater Hot Shop is all about. Completed ant, ready for the Ladd Brothers’ performance on March 21.