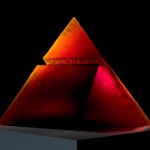 Of course that brings up another interesting question. In order to experience glass as transparent, we pretty much have to see something through it, which means that thing on the other side of the glass has to be reflecting light from its surface for us to perceive. So next we need to examine reflectivity and what that means.