The Corning Museum of Glass recently received a recognition that only a handful of museums have earned: a patent. Both the Museum and Spiral Arts, a Seattle-based manufacturer and distributor for glass furnaces and tools, were awarded US Patent No. 8891582 on November 18, for the electric glass hot shop system.

Most glassmaking equipment used in factories and studios is powered by natural gas or propane, making for a relatively noisy, cumbersome set-up. Imagine a silent, energy-efficient hot shop, powered by electricity—one that can be transported and used in places where gases aren’t available or are prohibited. That’s what was envisioned by Steve Gibbs, senior manager of hot glass programs for The Corning Museum of Glass, and created by Fred Metz, founder and president of Spiral Arts. 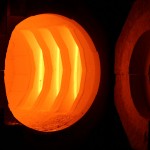 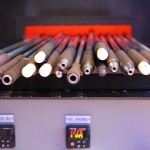 Metz and his team have been designing and manufacturing the Museum’s equipment for nearly 20 years, starting with The Studio in 1996, then working with Gibbs to revamp the Hot Glass Show in 1999, create the Roadshow in 2002, and most recently working on the state-of-the-art hot shop for the Contemporary Art + Design Wing. Gibbs has been working in glass much of his life, first learning from his uncle’s stained glass business, and eventually working for Steuben Glass and then The Corning Museum of Glass. Metz and Gibbs have collaborated on the majority of the Museum’s hot glass projects. But it was one particular request that came in 2006 that would eventually lead to the first patent for both the Museum and Spiral Arts.

When Celebrity Cruises called to inquire about blowing glass at sea, there was both excitement and pause. Although the Museum had already been taking glassmaking beyond its doors with the Roadshow, blowing glass at the 2002 Olympics in Salt Lake City, UT, and places as far away as Australia, it was primarily a gas-powered system that would not work on board a cruise ship. “Cruise ships don’t even allow candles with real flames, so it was a thrilling challenge to figure out how to produce the amount of heat needed to blow glass onboard,” said Gibbs, who also happens to be a captain licensed by the Coast Guard. “We knew we needed to make the magic of the Hot Glass Show happen with hot shop equipment that did not use natural gas or propane. That was crucial to ensuring the continued safety of the ship.”

Many alternative sources, from compressed natural gas to diesel fuel, were discussed as potential solutions. But ultimately, Metz and Gibbs knew they would need to create an all-electric hot shop in order to realize this dream of partnering with Celebrity. Although people had experimented with building electric equipment before, no one had invented a hot shop that ran solely on electrical power and functioned as well as a gas shop.

“We had no proven technology, and we were going to be blowing glass on a cruise ship in two years,” said Gibbs. “This had never been done before. The world was watching us, so we needed to come through. Fred and I put our heads together to begin to figure out how we could optimize and make a dependable glassmaking shop, all powered with electric, that would run every day with the vibrations and challenges of being on a cruise ship.”

And that’s exactly what they did. The all-electric hot shop includes a furnace, glory hole (reheating chamber), pipe warmer, a pick-up box, a color box, an auxiliary furnace, and a standard electric annealer. Some of the highlights of this system include: “There were times we weren’t sure it was going to work,” said Gibbs. “Fred really picked me up at a low point and said, ‘Yes, we can.’ And we did. Being able to work together toward a dream that never existed before, in such a professional and innovative way was nothing less than a pure joy.”

“We think of ourselves as making ideas that will contribute to overall studio glass,” said Metz. “For us, it’s nice to know we’ve got something unique. When you’re being really innovative and putting a lot of work into something, it’s nice to have that recognized patent.”

Since 2008, the Museum has been blowing glass at sea on three of Celebrity’s Solstice Class ships and is consistently rated as a top entertainment experience by guests. Over the course of a year, as many as 400,000 cruisers from around the world can take in a Hot Glass Show at sea, essentially doubling the reach of the Museum, which welcomes 420,000 visitors to Corning, annually.

“It’s our mission to tell the world about glass, and that’s exactly what we’re doing on the ships with this electric hot shop,” said Marie McKee, who was president of The Corning Museum of Glass at the time the equipment was developed. “This patent continues the history of The Corning Museum of Glass being innovators. Telling the story of glass history is very exciting and at the core of what we do, but we are also a museum that is reaching out, innovating, and exploring the future.” 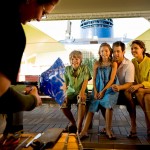