We hadn’t set any appointments for Tuesday afternoon, as we wanted to see what opportunities might present themselves. We did plan to check in with Cesare Toffolo to confirm our plan to interview him the following morning.

We ascended the stairs up above Cesare’s gallery space, expecting to find him in his usual perch in front of his torch. However, at this particular time, he happened to be in his office working on correspondence. We already had a plan to do dinner with him, his wife Teresa, Vittorio and Graziella Costantini, and a couple other folks we had yet to meet. So, he knew we had plans for the evening, but he asked what we had planned for the rest of the afternoon. I had been planning to catch up on some writing and review the videos we had already captured of Livio and Lucio. Cesare had some other very valuable suggestions for our time. He made a few calls, and next thing we knew we were headed out the door being led by Cesare to a couple of unexpected visits.

The first stop was to an old factory that has been run by two families for three generations named S.A.L.I.R. The acronym stands for Studio Ars et Labor Industrie Riunite. We had the opportunity to spend some time with the second generation sons, Mario D’Alpaos and Luigi Toso, who are currently running the business that their fathers began in 1923. Mario gave us a tour for the better part of two hours, and Luigi popped in with some comments as he was available. 1923 certainly does not date back very far into the Muranese glass factory history, but at that time there was a void in the production of many of the classical Venetian works such as engraved and painted table wear, as well as the decorative mirrors that are so prevalent at many of the higher-end hotels in Venice. Mario and Luigi’s fathers filled the void, and with fine craftsmanship and excellent business acumen they continue to be leaders in this field. They are one of very few family-run factories left on the island, and they represent a classic example of how business had been conducted for many years there. 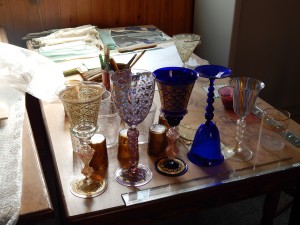 Enameling in process at SALIR 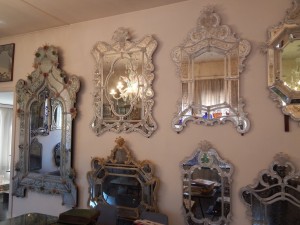 We began with a visit to their showroom. The walls were covered with all sorts of elegant mirror styles, and the rooms contained shelving that was stacked top to bottom with finely blown tableware. Much of the tableware was covered in classic engraving and painting/gilding design-work. There were hundreds of beautiful pieces, and it was a bit overwhelming to try and take it all in. From the showroom, Mario led us through the different workshops around the complex. From the enameling, gilding, and painting space….to the cutting room…up to the engraving room….and finally to the mirror framing and assembly shop. In each room he graciously explained their processes in great detail, and even explained their age-old cataloging systems for retaining and retrieving designs they had developed through the years. Mario shows us how the mirror frames are reproduced at SALIR

Unfortunately, the tour would have to end as Mario had further appointments for the day, and so did we.  We did arrange a time to meet and do a short interview for the following day though.