As this day began, we had firm plans for an interview with Lucio Bubacco and tentative plans for some other possible visits. As the day unfolded, it turned out to be a 15-hour treasure trove of interviews, tours, and demos for the ages. My feet still ache just thinking about it. We arrived at the studio of Lucio Bubacco right on time. Lucio was just finishing a few small pieces for a light fixture which gave us ample time to set-up a space for the interview in his personal gallery area. Lucio is internationally renowned for his flameworked sculpture which typically involves very classically detailed human forms as well as references to ancient mythology.

Lucio was very forthcoming with information about his beginnings in art. Growing up on Murano, he always assumed that he would work with glass at some point in his adult life, but he really did not want to be trapped by making production work as was more the tradition on the island. He had the opportunity to go to design school in Venice to develop an understanding for classical design, painting, and human anatomy, and this background in classical design continues to permeate most of his work. We prepare for Lucio’s interview in his gallery space.

He pointed out that accurately portraying the human form in glass is extremely difficult, and most of the figurative works being flameworked on Murano when he was beginning were very simple—almost like caricatures rather than true human forms. One artist would develop a new caricature, and many others would copy that form because it was simple enough to do. He insisted on pushing beyond this level of work to create figures that much more accurately depict anatomy, motion, and emotion.

Lucio admitted to being greatly influenced by the anatomically accurate pursuits of Da Vinci and ancient Greco-Roman sculptors. However, he clearly is working towards some groundbreaking new work of his own. 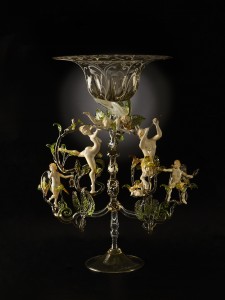 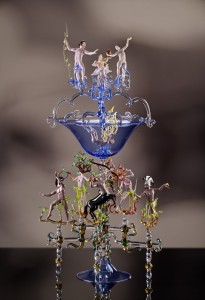 Flameworking has traditionally been considered a process for smaller scale works, but Lucio continues to find ways to combine flameworking with processes such as glassblowing, hot-casting, and now kiln-casting, to increase the scale of his works and render them much more visually powerful. He now has his sights set on incorporating his figurative works into large-scale architectural works, and he continues to develop new processes to bring these designs to fruition. I find it incredibly inspiring to see such a talented artist continuing to push himself so hard.

Lucio was a very gracious host, and we would have loved to talk with him all day. However, he had a lot more work to accomplish with his day. He spent almost three hours with us. We were already running late for lunch at the studio of Davide Salvadore, and we had quite a bit more to accomplish on this day as well.

Lucio’s interview breaks down to about 45 minutes after minimal editing, and it will be available for viewing at our Rakow Research Library here at the Museum. Watch a clip from the interview on our YouTube channel.