This year’s acquisition is a vase with Cubist composition, designed by the celebrated painter Fernand Léger (French, 1881–1955). The vase is one of the groundbreaking “Twenty-Seven Contemporary Artists” series that was made by Steuben in 1939 and exhibited for the first time in January, 1940. It was originally bought at Steuben shortly after the exhibition and retains the original labeled shipping box, original Steuben box, and original packing material.

Beginning in 1937, Steuben’s design director John Monteith Gates began to enlist well-known European and American artists to create designs for Steuben glass. Steuben planned to make a limited edition of six of each design, five of which would be sold, and one of which was to be kept by Steuben. However, Steuben did not make a full edition of all of the designs, they did not keep a set, and they did not keep track of how many were made, so the exact number of each design that was produced is unknown. Drawer of vase by Leger. Collection of the Rakow Research Library.

The Museum owns nine of the “Twenty-Seven Contemporary Artists” series. The Rakow library owns original drawings for 21 of the 27 designs, including the Léger vase, which were the gift of Corning Incorporated,the company that owned Steuben. 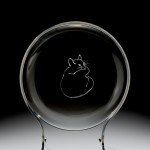 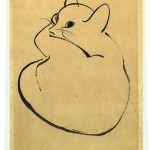 Drawing of The Cat, Isamu Noguchi. Collection of the Rakow Research Library. 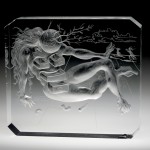 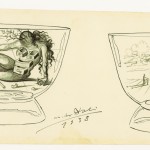 Drawing of Vase with Nude, Salvador Dali, Collection of the Rakow Research Library.

The Fernand Leger vase is an exciting addition to this collection that the Museum staff hopes, one day, will include all of the designs of this important series.