Philadelphia-based glass artist Amber Cowan visited the Museum last night to unveil the piece she made for this year’s Rakow Commission, an award given to up-and-coming or established artists whose work is not yet represented in the Museum. Her piece, entitled Garden of the Forgotten and Extinct, is now on display in the Ben W. Heineman Sr. Family Gallery of Contemporary Glass. New Rakow Commission: Garden of the Forgotten and Extinct, 2014.4.75

Cowan’s work expresses the idea of preserving memories of earlier objects in new contemporary works, essentially breathing into them “second life,” she says. Like many of her pieces, the new Rakow Commission is made from found American pressed milk glass (opaque white glass) made between the 1940s and 1980s. Cowan collects long-forgotten objects like candy dishes, teacups, and plates from thrift shops, flea markets, and even eBay, and “reforms them into beautiful and evocative sculptures.” The discarded glass which she notes has been “abandoned to the dust bins of American design” is turned into tiny leaves, fruits, swans, roses and abstract spirals, bits and spikes.

The title of the piece—Garden of the Forgotten and Extinct—refers to the fact that the commercial milk glass that Cowan repurposes is no longer made. This common, inexpensive type of glass—originally traded for S&H Green Stamps—has been discarded and forgotten by contemporary culture, whose interests, styles, and fashions are vastly different from those of the era that the original glass represents.

Garden of the Forgotten and Extinct is flameworked, hot-worked, fused and sandblasted, and features include a pair of lambs, a lion, a double-humped camel, and a swan, all hidden in dense layers of flowers, patterned leaves, and floral elements.

In creating this commission, Cowan was inspired by 18th-century French objects in the Museum’s collection. She enjoys looking and relooking at the numerous lampworked glass figures and elaborate glass and shell decorations from this period. In them, she experiences what she describes as “hidden moments,” which she hopes people will discover in this sculpture. Garden of the Forgotten and Extinct is the Museum’s 29th Rakow Commission. The Rakow Commission is an annual award that was inaugurated in 1986 by Museum benefactors Dr. and Mrs. Leonard S. Rakow.

On November 18, Amber Cowan will be coming back to the Museum to participate in a Google Art Talk with Tina Oldknow and Eric Meek. Designer Sigga Heimis and artist Andrew Page will also be joining to talk about their work in contemporary glass. 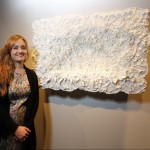 Rakow Commission Artist Amber Cowan and her piece, Garden of the Forgotten and Extinct 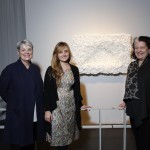