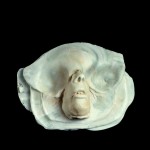 Allison B. Krause. Jeffrey Glenn Miller. Sandra Lee Scheuer. William Knox Schroeder. These are the names of the four victims of the shootings at Kent State University on May 4, 1970 in Kent, Ohio. All of them were students at Kent State University at the time. The Museum has a piece on display, titled Ravenna Grand Jury/Masked Bandit (73.4.51) by Henry Halem, which is representative of this historical event. This action came after President Richard Nixon said while campaigning that the Vietnam War would conclude. After President Nixon said this, the United States invaded Cambodia which heightened American involvement in the Vietnam War. As a result, anti-war protests became highly popular—especially among college campuses. Kent Mayor Leroy Satrom grew concerned about the intensity of the anti-war protests in the area and asked Ohio Governor James Rhodes to dispatch the Ohio National Guard onto the Kent State University campus.

On May 4, 1970, after the burning of the ROTC building—who started the fire is still unknown to this day—four student protestors were shot and killed and nine others were injured. The Ohio National Guardsmen opened fire on students who were unarmed and were nonviolently expressing their opinions on the Vietnam War. To this day, it remains a mystery as to exactly why the Ohio National Guard started shooting. One thing that is certain is that the shootings on the Kent State University campus are an integral part of American history.

Henry Halem, who made Ravenna Grand Jury/Masked Bandit in 1972, was teaching at Kent State University when the shootings occurred and saw the whole event unfold. This masked face is representative of the blind justice of the Ravenna, Ohio grand jury. This jury acquitted the Ohio National Guardsmen though many believe that they were wrong to have opened fire at all.

See other works in the Corning Museum collection that address social and political commentary.

Ravenna Grand Jury/Masked Bandit is a cast piece and was specifically made via the cire perdue, or lost-wax, casting process. This process involves making a positive wax model of what a glassmaker wants their piece to look like, then building a mold of plaster or refractory clay around it. With the wax still inside, the mold is then fired and the wax melts out, leaving the mold hollow. This is how the process gets its name. After the mold cools, glass can either be blown or cast into the mold—in this case it was cast. The glassmaker will then allow the glass to anneal while still in the mold. At the end, they can chip away the mold to reveal their glass piece.