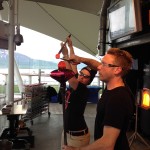 We have made it to the northernmost capital of the world! For being such a small city, Reykjavik packs a lot of punch in the art department. Despite the gloomy weather year-round, the residents keep things very cheery with brightly colored buildings and murals.

I must have collected about two-dozen images of local murals. And I absolutely love the Sun Voyager, a very stylized steel sculpture located along the waterfront of the city. Icelandic folklore is still very much alive and imagery and trinkets of trolls and elves are everywhere! This guy was particularly creepy but we made friends quickly. It’s a good thing that I packed my down jacket for Iceland. With a name like that they weren’t kidding around. Even the middle of July is cold here! After trekking around downtown Reykjavik, Iceland’s capital city, the team went for a dip in the infamous Blue Lagoon. Located in the middle of a lava field, this geothermal spa is one not to miss. Don’t worry it was just as relaxing as it looks. 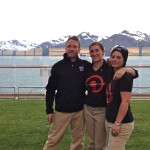 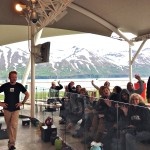 Here we are in a wintry paradise, your Hot Glass Show team: Chris Rochelle, Taryn Bertolino and Jamie Perian. Despite the chill, our fans were excited to watch the shows and very enthusiastic under their flannel blankets.

The second half of this cruise, we sailed off to Norway and visited one of my favorite places—Geiranger. Jamie and I gave our glassblower muscles an extra intense workout kayaking for 3 hours out in the fjord. What a magical place! We made it all the way out to the Seven Sisters Waterfall. Stavanger, Norway is a quaint city with lots of shops and restaurants and several unique museums like The Norwegian Canning Museum. Who knew sardines were such a big thing here? In the early 1900’s Stavanger was a major exporter of canned fish and shipped to 59 countries. The museum was actually in one of the town’s former canning factories. The coolest part was to see the genuine working canning machinery and also the hundreds of canning labels (especially from a design perspective). Jamie and I had a fun time goofing off in here with the equipment. When in Norway?! 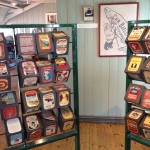 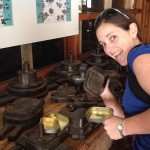