Dr. Marvin Bolt, the Museum’s new curator of science and technology, came to Corning last November from the Adler Planetarium in Chicago. I recently sat down with him to hear about what he’s looking forward to in his new role.

Dr. Bolt looks through the world’s oldest surviving dateable telescope, housed at Berlin’s Kunstgewerbmuseum (Museum of Decorative Arts). Dating no later than 1617, it was made in Augsburg, Germany for Duke Phillip II of Pomerania. The surprisingly clear image has a magnification of about 16, but the small field of view makes it a challenge to use.

Where did you move from and what were you doing before coming to Corning?

I lived in South Bend, Indiana, and commuted to the Adler Planetarium in Chicago – 93 miles each way. I did that for 17 years. It seems crazy now when I think about it, but I really enjoyed my position there as a curator and yet living in a smaller, university town.

What made you want to work for The Corning Museum of Glass?

I really enjoy objects, material culture, finding and telling interesting stories, and then developing exhibits and programming about them. That to me is really an exciting challenge. My area of research is on telescopes—17th and 18th century telescopes—and obviously The Corning Museum of Glass is a place where I can learn more about the glass in them, so that was the first attractor. When I saw the job description, I saw an art museum with a strong yet somewhat separate science component. They wanted to bring them together, and I thought, “This is exactly what I want to do.” There’s really no other museum I know with such a strong support for science alongside its artistic and social contexts. Then I found out there are glassblowers here that also know about material culture and history. Seeing the combination of these skilled artists, curators, teachers, educators, and everyone else on staff, complemented with the resources and opportunities to combine these topics, I knew this was where I had to go. This was perfect.

Had you visited The Corning Museum of Glass before?

No, I had not. But the opportunity came at a good time in my life – my four children are more or less out of the house and I decided that I’m not commuting 200 miles a day for the rest of my life. So it was either move closer to that job, or look for something new. I hadn’t really thought about it at all because that was already my dream job, but when The Corning Museum job description came across my desk, I thought, “This is even better!”

Tell us more about your time at the Adler Planetarium and Astronomy Museum.

I worked on many planetarium shows, education programs, and temporary exhibits on a variety of topics. I also led the development of a few permanent exhibits, including ones on archeoastronomy—or cultural astronomy, how people around the world use the sky to inform their lives—and on the evolution of the telescope up to the present time.

My first project was a 17-foot metal sphere pierced with 692 holes. When you bathe it with light from the outside it looks like the sky, since the holes are arranged to match the positions of the stars. It rotates and simulates the night sky. It had been cut it into 6 pieces and stored it in a warehouse. My first job was to put it back together, interpret it, and build a gallery around it. That started me on the art/science combination because the object itself was a scientific tool; it was the precursor of the modern projection planetarium, but when I was interpreting the globe, I realized what makes this interesting is not just the science of it, but the background story of the object. That was really the beginning of my curatorial career. And I realized that my role in the museum as a curator is to be a story teller. You have a particular interest in telescopes. What is it about them that fascinates you?

When I started at the Planetarium, I was asked to work on a catalogue of items in the collection there. My choice was partly random, partly directed —I thought, “You know, telescopes are kind of interesting.” I’d never looked through one in my life. Telescopes are a fundamental tool, and one that everybody knows about or at least recognizes. You can tell stories about them that connect to people, because a telescope is part of a common language and a shared culture. When you show an image of a telescope, people know that it’s a telescope, even if they don’t really know how it works or what you can see with it. That doesn’t matter – it’s like a pen or a pencil – it’s iconic. 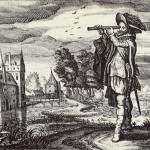 A very early depiction of a ‘Dutch telescope’ from “Emblemata of zinne-werck” (Middelburg, 1624), by poet and statesman Johan de Brune (1588-1658). Because only a few telescopes survive from the first decades since the telescope’s invention, this illustration provides useful information about the size and shape of the device in those years. 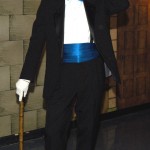 Many an elegantly dressed gentleman of the 19th century would have a scientific instrument on his person. This would likely be a small instrument fitting in his pocket – a telescope, a microscope, a globe, or even a planetarium. Having one of these on hand would demonstrate a gentleman’s knowledge or breeding and thus his place in society, and encourage a conversation about new wonders revealed by scientific pursuits.

Tell us a bit about the research you’ve been doing related to telescopes.

We’re cataloging all of the surviving refracting telescopes around the world made before 1775 (with the generous support of grants from the National Endowment for the Humanities and from the National Science Foundation, as well as a previous grant from the American Alliance of Museums). When we began, we thought there might be a few hundred. Here we are, many years later, with over one thousand catalogued, and we know of many hundreds more. With the help of people here, I can ask questions about the glass of telescope lenses that I never would have thought of before. We can actually test them and try different ways of making glass, and grinding and polishing it. We also assess the optical quality of the glass using modern laboratory techniques. We’ll then be able to take historical texts and documents, and say, “This works, or no, it’s actually different from that description.” This kind of research makes contributions to our understanding of glass that can’t be accomplished anywhere else. It involves optical physicists as well as our curators, glassblowers, Rakow library and Studio staff, and other folks in a project that combines science and technology, history, art history, material studies, craft traditions, and much more. I don’t think it gets much cooler than that. 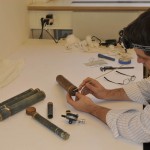 Thorough research of historic telescopes sometimes includes the careful removal of the objective lens and the materials holding the lens in place. Here, Dr. Bolt is removing the lens from an early-18th-century telescope in order to examine the glass in detail and to make preliminary measurements of its optical properties. 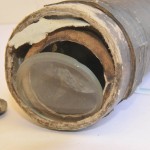 The tubes of most 17th-century telescopes consisted of paper, layered and glued together to provide strength and covered with leather for protection. A surprising number of these more than 300-year-old devices still include their original glass lenses, making it possible to learn about the craft of making them and about what our ancestors could see through them. 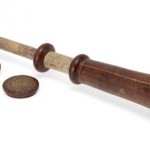 A rare, trumpet-shaped telescope, by Jacob Cunigham, 1661. Currently in the National Maritime Museum, Greenwich, England. The two draw tubes are made of vellum, with the main barrel consisting of wood and covered in red leather with gold-tooled decorations.

Yours is a new position. What are you looking forward to here in your role as curator of science and technology?

I’m delighted to have the opportunity to build a world-class science and technology collection, one that complements the renowned collections already here. That’s part of the bigger, overall goal to forge a closer link between the Innovation Center and the rest of the Museum. We know that people already enjoy the science and technology experience they have here. We’re going to keep the things that work, while adding elements that enrich those experiences and make those connections even stronger, more compelling, and unforgettable. To me, that’s the really interesting challenge. I could go to almost any science center and develop focused science exhibits, but here we can help create experiences that integrate science and art in a way that can’t be done at any other museum in the world.

Do you have a favorite piece in the collection?

Well, I have to answer the 200” disk, right? That’s too easy, so I came up with a top ten list. Among my favorites are the Roman Cage Cup—the mechanical fragility of that is just amazing to me—the Chinese Warrior Vase, and Uranium glasses. How can you not love those? At the top of the list is a hidden treasure in the Innovation Center: the housing for a camera used in U-2 spy planes in the early 1960s during the Cold War. Few visitors notice it, even though it’s one of the coolest objects on display. Who would come to our glass museum expecting to find such a fascinating connection to the Cold War? This prototype tube was used in a special long-focus surveillance camera during the Cold War.

What’s your favorite thing about living in the Corning area so far?

People have been very welcoming and friendly here. It’s a wonderful place to live for that reason alone, and the beautiful scenery here adds to that. Although we live a bit out of town, it’s just 12 minutes to work, a much better commute. So far, I’d have to say that’s my favorite thing about living here, because it has given me an opportunity to become an active part of the community, which is the real goal of living anywhere. Living so close to work, I can even go home if I forget something. Now, I have time every day to do something I enjoy that’s not directly work-related, like cut down a tree or chop some firewood, and have more time with my wife, Linda. That has been the biggest positive change.

Join Dr. Marv Bolt for a Behind the Glass lecture from 7-8 p.m. on October 9, 2014, in the Auditorium of The Corning Museum of Glass. He will share some of his research that has taken him all over the world in search of the oldest existing telescopes. No astronomy knowledge is required to enjoy Dr. Bolt’s talk. The event is free and open to the public. Dr. Bolt says of this telescope: In my opinion, the most spectacular surviving decorative telescope from the 17th century is this ivory example now at Chicago’s Adler Planetarium. The 5 draw tubes extend to about 80 cm, making it very heavy to use. The ornate scalloped main tube – consisting of 4 tubes that screw together – strongly suggest it was made in Germany c.1660, perhaps in Nuremburg, a center of ivory trade and the production of ivory sundials.