Each year, The Studio gives class instructors the opportunity to do more than just teach. The Instructor Collaborative Residency is a unique residency at The Studio, open to anyone who has taught an intensive class here in the last five years. The seven- to ten-day residency is held each September, challenging artists to work together to create and learn from each other. This year, there were two separate instructor residencies.

The first was a collaboration between Moshe Bursuker, a New York-based artist who incorporates photography and glass into his sculptures and installations, and Jamie Harris, a glass artist and designer from NYC who finds inspiration in abstract expressionist paintings and is particularly interested in color and pattern. During their residency, Bursuker and Harris wanted to create a chandelier, blending both of their interests in lighting and design. Both artists enjoy blowing glass as well as casting and cold working, and this was a project that incorporated those techniques.

“We achieved our goals and more,” said Bursuker. “We were able to use The Studio’s recourses to work out both technical and aesthetic issues. We were forced to make fast and decisive choices in our design and fabrication. It was an incredible experience to see these pieces come to life in such a short amount of time.” 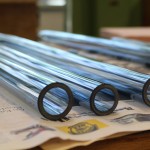 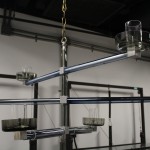 Harris said their inspiration was a Venetian chandelier with multiple components, such as the arms, cups, and bowls, and to “re-interpret and deconstruct it into a very modernist, contemporary version.”

“We had an exhausting and exhilarating time,” said Harris. “One of the wonderful aspects of a residency like this is to have the freedom to try out ideas that turn out to be dead ends, and we spent a number of days experimenting before we finalized the direction we wanted to take our chandelier in. We made a lot of work, which we’re both very excited about, and now have a bit of work remaining to finish what we started at the Studio.” Bursuker and Harris created two separate chandeliers during their residency at The Studio.

Later in the month, three artists collaborated at The Studio. Sayaka Suzuki, a Virginia-based artist who works primarily in cast glass and pâte de verre. Originally from Japan, her current work is inspired by multi-cultural identity. Suzuki worked in collaboration with Boyd Sugiki and Lisa Zerkowitz, a husband-and-wife team who met during their time at Rhode Island School of Design and now run Two Tone Studios in Seattle. They create decorate objects and tabletop items, blending Sugiki’s love of color and glass blowing with Zerkowitz’s passion for drawing and kiln-casting. 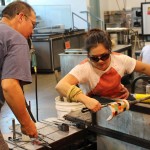 Sayaka Suzuki and Boyd Sugiki collaborate during their residency at The Studio. 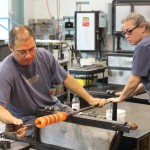 Boyd Sugiki and Lisa Zerkowitz collaborate during their residency at The Studio.

During their time at The Studio, the artists wanted to explore “uncharted territory,” combining hot and warm glass, while expanding on familiar techniques and experimenting with new ones. Each artist had different things they were working on, but collaborated to combine techniques, like taking a casting to the hot shop, to see what happened.

“Coming to The Studio is like being a kid walking into Willy Wonka’s Chocolate Factory and someone saying, ‘Have fun!’” Sugiki said. “How could you not achieve anything you would want to do here? Working at The Studio has been a dream.”

Zerkowitz worked on a series of 12 small castings, based on the four seasons. The first set was made in the traditional way she casts glass at home; the second combined her traditional way with the pâte de verre technique Suzuki typically uses; and the third was entirely pâte de verre. “I wanted to try things I have thought about doing, but never had time or resources to experiment with,” Zerkowitz said. “And I wanted to take advantage of Boyd’s knowledge of hot glass working and Sayaka’s experience with kiln working to learn from each other.”

Suzuki didn’t come into her residency with the intention of making a masterpiece, but rather with the goal to experiment.

“I think what’s great about this residency is that they give you time away from your normal schedule, and you can really experiment without feeling the limitation that you normally feel when you are in your own studio,” Suzuki said. “It’s very freeing. I really feel like I’m playing. When you allow yourself the opportunity to play without any preconceived notion of what the end result is going to be, that’s when you make the best work.” 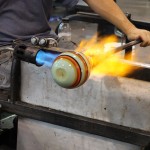 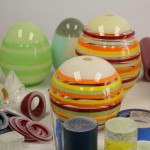 The Instructor Collaborative Residency is a time to encourage community building among artists, and to allow instructors to explore new projects for which they typically don’t have time while they are teaching intensive classes, according to Allison Duncan, Special Projects Manager for The Studio. It is also an opportunity to thank intensive class instructors for being a part of our program. While here, artists have access to nearly any studio spaces and supplies that they could need to achieve their goals. In addition to this program, The Studio aims to be an advocate for glass artists by providing classes, scholarships, and month-long Artist-in-Residence programs, which host one or two individual artists per month in March, April, May, October, and November of every year.

The deadline for 2015 residency proposals is October 31, 2014. Visit http://www.cmog.org/glassmaking/studio/residencies for more information.