Each year, the Museum makes available one or more Rakow Grants for Glass Research, totaling up to $10,000, with the purpose of fostering scholarly research in the history of glass and glassmaking. One of this year’s recipients, Dr. Anna Hodgkinson, is using the grant to excavate what may have been a kiln used for glassmaking purposes in ancient Egypt.

Hodgkinson’s work will take her to Amarna, the site of a new capital city founded by Pharaoh Akhenaten during the ancient Egyptian New Kingdom, c. 1550 – c. 1150 BC. She visited the region once before, participating in the re-excavation of the Great Aten Temple in 2012, and examining glass finds from this and other Amarna sites. In spring 2013, she first saw the buildings, called M50.14-16, and gained permission for the fieldwork for which she’ll be using the grant. “I am very much interested in ancient Egyptian technology, but glassmaking and working in particular,” Hodgkinson said. “Being an archeologist with experience in several countries, I am most fascinated by settlement archaeology, material culture and the identification of social structures.”

While this particular area of Amarna has already been excavated and recorded in the 1923 publication, The City of Akhenaten, Part I: Excavations of 1921 and 1922 at el-‘Amarneh, the work was completed quickly, and important details were overlooked. The kiln site Hodgkinson’s team will be excavating is marked on the building’s plan simply as “X” with only rough dimensions, suggesting there is still much to be excavated. The 1922 excavation indicated remains of “burnt brick, glass, and glaze slag, and fragments of pots used in the kiln for standing the glazed vessels on,” indicating the site may once have been used for glassmaking. 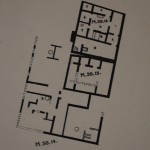 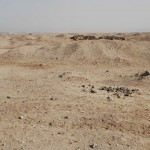 The area of vitrified mud-brick on surface at M50.15-16 and the ruins of the houses, looking north towards the house of Ranefer. Photo credit: Anna Hodgkinson

It was previously determined that M50.14-16 were of a domestic nature but Hodgkinson says it is possible that building M50.14 functioned chiefly as an industrial area. “The finding of bronze tools and a faience mold in this area, in addition to the ‘glaze kiln’ by previous excavators, would reinforce this possibility,” she said.

This fall, Hodgkinson will spend four weeks working with a team, including several international members and eight local Egyptian members, to excavate a total of six squares, each measuring 5x5m, and covering the southern parts of the buildings M50.14-16, where ovens and kilns were discovered. 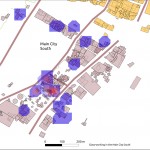 “It is great to have the support of The Corning Museum of Glass as an internationally-recognized institution for the study, conservation and education in glass—glass as material, but also as a means of understanding ancient cultures and technologies,” Hodgkinson said.

Hodgkinson will publish her findings in the Journal of Glass Studies.

“The Amarna site has been an unanswered question,” said Karol Wight, executive director of the Museum. “The dig suggested but did not confirm a glassmaking kiln. That Dr. Hodgkinson and team are now going back to investigate again and answer that question is very important for our understanding of glass technology in Egypt at that time.”

Wight noted that the inlay portrait of Akhenaten, acquired in 2012, was presumably made in Amarna, only adding to the intrigue of this particular dig.

“To hopefully find a link between our collection and the Rakow Grant project is always very nice,” Wight said.