Marketing + Communications Specialist Theresa Cornelissen just joined the Museum late last spring and is experiencing many of our programs for the first time. This is the first in a short series of blogs about her experiences.

If you’ve ever seen a live hot glass demonstration at the Museum, you’re aware that watching a gaffer transform a molten, amorphous blob into a beautiful and imaginative creation is a little bit like watching a magician make a seed grow and blossom right before your eyes. It’s one of those things where you leave thinking “it can’t get better than that.” But, as I learned this week, it does get better. If you take something that’s already great and combine it with a warm, sunshine-filled late summer evening you end up with what can only be described as a truly delightful experience.

When I arrived at the Courtyard Stage to see The Late Show, it was already a lovely evening with plenty of sun and a light breeze drifting across the stage. A few guests had already gathered and were chatting amongst themselves as we waited.  Before I knew it, every single seat around me had filled and guests were beginning to line the gallery area. The chatter turned to buzz as we saw our gaffers and narrator approach the stage. Catherine Ayres, Aaron Jack, and our narrator, Heather Spiewak, said a few words to each other before Heather addressed the now hushed crowd. As she introduced Catherine and Aaron and explained what their roles would be, I saw that Catherine had already begun shaping a small gather of glass. Katherine begins with a small gather

Heather and Aaron encouraged the audience to ask questions while Catherine was working on her piece. Heather would explain, in between inquiries, what Catherine was doing and why she was doing it. Aaron, as Catherine’s assistant, practically danced around the stage, helping to gather, heat the glass, or hand her a specific tool she needed. Aaron assists Catherine when she needs an extra set of hands.

As I watched, Catherine’s small gather had taken on a shape and color. It looked like she was creating a light green and blue vase with a tie-dyed effect. Catherine and Aaron then performed a transfer of the piece from the blowpipe to the punty with the greatest of ease. From there, Catherine began to really change the look of what I thought, was a vase. 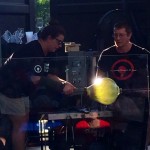 Catherine is changing the look of this piece. 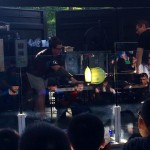 That’s not a vase!

Catherine then brought this new, wide-mouthed vase to the furnace and proceeded to heat the glass up again. It was then that Heather announced to the audience that we should watch closely because Catherine was about to dramatically alter the shape of this piece without even using any tools. The crowd fell silent. Quickly and deftly Catherine removed the piece from the furnace, turned the punty upside down and began to spin the piece. What happened next can only be described as magic.

The glass had been heated to a honey-like consistency and the centrifugal force of spinning the punty allowed the glass to flutter out and create a beautiful ruffle-edged bowl. The seed had grown and blossomed. Right before our eyes. 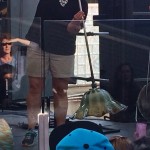 Catherine spins the punty to create a ruffled effect. 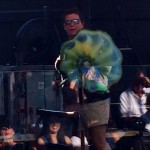 Catherine shows off her lovely bowl.

The enchanted audience broke into applause and oh’d and ah’d over the new piece.  Catherine held it up one last time for us to see and then expertly knocked the piece from the punty into the waiting, Kevlar-gloved hands of Aaron Jack. Smiling, he put the piece in the annealer so that it could slowly cool overnight. The audience gave our demonstrators another round of applause and began to disperse into the summer evening. 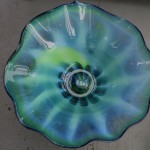 A look at Catherine’s finished piece. 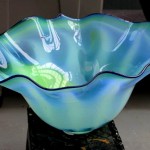 A look at Catherine’s finished piece.

We offer Hot Glass Shows year-round, but the Late Show is only on for another few weeks, through Labor Day. Don’t miss out on the opportunity to enjoy a summer night at the Museum before fall arrives.