Dr. Gregory (Greg) Merkel, a research fellow in Corning Incorporated’s Crystalline Materials Research Department since 1981, has had a lifelong interest in the arts and natural sciences. Motivated by a quest for beauty and a strong intellectual curiosity, he has an enthusiasm for glass that spans all of its aesthetic, historic, and scientific aspects.

It’s not surprising then, that he is actively involved with The Corning Museum of Glass as a Fellow, researcher, and Ennion member. The Ennion Society is an honorary group for donors who make annual gifts of $1,200 or more. Donations are used for acquisitions to the Museum’s glass collection, the world’s most important collection of glass, including the finest examples of glassmaking spanning 3,500 years.

“The Museum’s collections, the Annual Seminar on Glass, the extensive materials in the Rakow Research Library, and my associations with the curators, educators, glassmakers, and library staff have all been essential to the growth of my passion for glass,” says Greg.

A collector of iridescent glass from the 1860s to the 1920s, he initially focused on collecting Steuben glass from Frederick Carder’s era, then became interested in the science behind Steuben and Tiffany iridescent luster glass. Recently, he has been compiling and interpreting the glass formulas in Frederick Carder’s laboratory notebooks, housed in the Rakow Library. 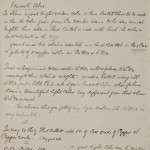 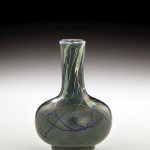 Tyrian Vase, Frederick Carder, Corning, NY, about 1916. Gift of Wende Wilson in memory of her parents, MacGregor and Eileen Wilson, who lived in Hamburg, NY. 2011.4.83.

Greg has also worked closely with Dr. Robert Brill, the Museum’s research scientist emeritus, using the Museum’s portable X-ray fluorescence spectrometer to establish the correlation of objects with specific formulas. He has shared some of his research at the Carder Steuben Symposia and the Museum’s Annual Seminar on Glass. Greg is currently writing a comprehensive book on Carder Steuben colored and iridescent glassware.

Supporting The Corning Museum of Glass is very important to Greg: “My role as a Museum Fellow and my membership in the Ennion Society enable me to support both the Rakow Research Library and the Museum, which I see as caretakers of many of the world’s most precious materials and objects.”