Lighting glass objects for photography is always a matter of controlling contrast. Sometimes you need less contrast and sometimes you need more, but you always need to be able to control the contrast. This is because the way we perceive glass is the result of how the glass itself transmits, refracts, reflects, and distorts light. Photographing shallow glass objects such as plates, bowls, or plaques always presents challenges in this respect, especially if an object is pressed. Often, the visual resolution of the pattern breaks down once the object is placed on a flat surface, even if that surface is a backlit photo table.

This phenomenon occurs because the slightly soft and rounded bits of detail act as lenses, however imperfect, and distort the view through the glass. The field of view of each of these “lenses” must include a contrast of highlight and shadow and also be at a sufficient distance from the “lens” to resolve properly. If there is little contrast seen through the “lenses,” then there will be little contrast visible in the pattern itself. Simply lifting the object off of the surface is enough to render more of the detail and adding lighting contrast to that surface improves the detail even more.

So how do you photograph an object when it’s not actually sitting on a surface? Well…you can’t, but you can photograph it on a transparent surface. Using a glass shelf lighting setup is a great way to deal with this situation. This Lalique ashtray (Fauvettes/Warblers 2011.3.437), now on view in René Lalique: Enchanted by Glass, was photographed using this technique. The shelf setup shown here allows the object to be elevated above the background. Care must be taken to avoid reflections on the top surface of the shelf glass. Each of the following sets of images shows the object image as captured by the camera on the left and the lighting setup on the right. At the bottom of each setup image there is a Fresnel spotlight that can be incrementally spotted or flooded to change the beam spread on the background below the shelf.

Simply elevating the object on the shelf allows some detail to render better, but it is not very defined because the lighting is still fairly broad and low contrast underneath the object. 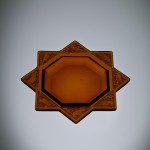 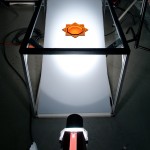 Spotting the backlight down a little creates more contrast on the background and the detail begins to be rendered more crisply. 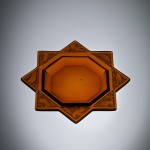 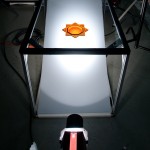 Spotting the background light even further greatly improves the contrast and detail in the object itself. 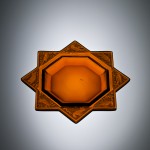 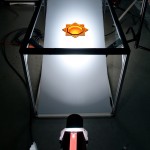 The final step is to add top light, in this case from a low angle. This raking light renders surface detail and adds reflections that show both the glossy and matte textures and the “glassiness” of the object. 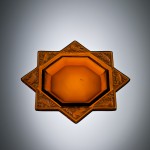 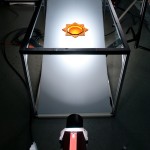 As this example shows, controlling contrast makes all the difference for rendering the detail in this object. Glass is an incredible material because of the many ways it transmits, refracts, reflects, and distorts light. With a little forethought, care, effort, and experimentation, these same properties can be exploited to capture images of glass effectively and beautifully.