Shortly before taking up the position of curator of European and Asian glass here at The Corning Museum of Glass last year, I was contacted by the Antiquarian Society of the Art Institute of Chicago to see if I might give their annual lecture in May. This was due to the fact I had been one of the Irish art historians in consistent touch with Christopher Monkhouse, the Art Institute’s Eloise W. Martin Chair and Curator of European Decorative Arts over the past five years. Christopher has been very busy preparing to stage a major exhibition, Ireland: Art on a World Stage, 1690-1840, at the Art Institute to be opened on March 17, 2015, on the history of Irish decorative arts during this time period. The exhibit will also incorporate sculpture, painting, architecture and book-bindings. Such an exhibition has never before been undertaken on either side of the Atlantic.

In anticipation of the Art Institute’s exhibition my lecture to the Antiquarian Society discussed Irish glass from the 17th through to the late 19th centuries. The lecture detailed the history of 18th and 19th century traditional glassmaking production in the cities of Waterford, Cork, Dublin, and Belfast, as represented in the collections of The Corning Museum of Glass and the National Museum of Ireland.

Everyone knows the name ‘Waterford’ as being synonymous with Irish glass, but what is lesser known is the fact that all of the four main cities of Ireland were involved in glass production during those centuries. The golden age of Irish glass dates from the last quarter of the 18th century, when, under pressure from the Irish parliament, the English House of Commons repealed the Act prohibiting the export of Irish glass from Ireland and allowed its export to any place except Great Britain. 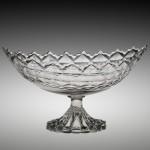 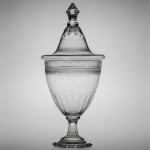 What made the day even more noteworthy was the visit to the Art Institute that morning of the President of Ireland, Michael D. Higgins and his wife Sabina Coyne. Thanks to Christopher Monkhouse and assistant research curator Leslie Fitzpatrick, I was given the great honor of meeting President Higgins, who was on the last day of a five-day official visit to the United States. A poet, writer and human rights advocate, President Higgins has served at every level of public life in Ireland, including as the country’s first Minister for Arts, Culture and the Gaeltacht (the country’s regions in which Irish is the predominantly spoken language). The exhibition on Irish decorative arts to open at the Art Institute of Chicago on St. Patrick’s Day 2015 will interpret more than 300 objects, sourced entirely from North American public and private collections. We here at The Corning Museum of Glass wish Christopher and his team every success for what will undoubtedly be an immensely popular and groundbreaking exhibition.