Some of the most well-known and beloved objects made by the master French artist and designer René Lalique, are his automobile mascots, or  bouchons de radiateur (radiator caps). Decorative mascots began to adorn radiator caps starting in the 1920s. The introduction of internal combustion engines in automobiles resulted in the production of radiators to cool them, with caps that were visible above the engine hood. Automobile companies displayed their company emblems, or mascots, on radiator caps. This automobile mascot in the Museum’s collection, called Vitesse (Speed), is still attached to a radiator cap. Significant social changes in the 1920s also influenced Lalique’s production of decorative automobile mascots, namely, the changing role of women. The “New Woman,” as she was called, voted, drove cars, was more relaxed in her behavior and appearance, and enjoyed smoking and drinking. Lalique embraced these emerging social trends by designing objects that would appeal to the New Woman, such as smoking and drinking accessories, and automobile mascots. Between 1920 and 1931, Lalique created about 30 automobile mascots, some of which could be illuminated through a small battery operated light source attached to the base. The Museum’s collection contains 14 different mascot designs by Lalique, including both plaster models and finished glass objects. 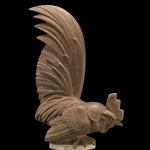 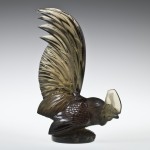 Lalique’s earliest mascot was Sirène (Mermaid), originally released in 1920 as a statuette. His statuettes were often reused to create automobile mascots, bookends, and paperweights. The most common material for automobile mascots was metal, but Bakelite, plastic, and glass were also used. All of Lalique’s mascots were made of glass. In 1925, Lalique was commissioned by the French car manufacturer Citroën to produce an automobile mascot for its popular Type C automobile. This small car was easy to handle, making it a favorite among women drivers. Lalique’s Citroën mascot, called Cinq cheveau, has five horses with represents 5CV, the taxable horsepower of the car in France. This very rare plaster model, in the form of a running greyhound, was for a one-of-a-kind automobile mascot made by Lalique as a special commission in 1929 for Edward, Prince of Wales. Although World War II forced the closure of Lalique’s factory in Wingen-sur-Moder, automobile mascots remained popular through the war. René Lalique died at the end of World War II. The steel molds for his mascots survived the war, and after his son Marc Lalique reopened the factory in 1945, more mascots were produced during the late 1940s and early 1950s. Automobiles were much sleeker in the 1950s, decreasing the demand for decorative hood ornaments, and by the 1960s, automobile mascots had almost completely disappeared. A Lalique Victoire mascot on the hood of a 1937 Rolls-Royce IIIS Phantom owned by the Prince of Berar. (Photo courtesy of Flickr user klintan77)

See Lalique mascots and molds on view in the exhibition René Lalique: Enchanted by Glass.