Last April, the Museum joined the top contributors to the Google Art Project with the addition of 1,000 high resolution artwork images. Our glass collection encompasses more than 3,500 years of glassmaking, from ancient Egyptian and Venetian masterpieces to works by contemporary artists, so we’ve got a lot more to share.

We’re happy to announce that we’ve recently added an additional 1,000 artwork images to the Art Project, including a stunning gigapixel photo of a Museum favorite. Warren Bunn, collections and exhibitions manager, along with Nick Williams and Andy Fortune of our photography department share a behind the scenes look at the process of creating an image that has over 1 billion pixels.

When it came time to decide the object for the Gigapixel capture, executive director Karol Wight asked the curatorial and education staff to give the suggestions. Our criteria included that it be “glassy,” that it be an iconic image for the Museum and that it would be a piece that would benefit from the technology (that there would be fine detail and technique that you could zoom in and see at high resolution). Some of the suggestions ranged from the Portrait of King Amenhotep II to a work by Louis Comfort Tiffany, but once we ran our ideas by the Google folks they explained that the technology and capture works best with objects that have very shallow relief so there is clear focus.

The Moorish Bathers cameo plate was in our top choices, and it became the obvious choice due to low relief and the high level of detail which would best leverage the technology.

The piece was de-installed, packed and moved to the digital imaging studio so that the Museum’s photo staff could do the initial set-up and lighting. Cameo plates like this one are usually photographed from directly overhead. The plate is placed on a large horizontal plate glass shelf about two feet above a black background and a beam of light is bounce off of a reflector card underneath to allow the color of the blank to come through. A raking top light is used to reveal the depth and detail of the carving. When the Google crew arrived, we learned that the camera mount system cannot work in a horizontal position so the photographers had to modify the setup so it would work with an angled shelf. The plate was supported with two stops carefully positioned so as to not interfere with the visible edges of the plate.

The Google “Gigapixel capture crew” set up a portable capture station which shot 110-120 tiles (they divided the overall image into squares) at a very high resolution and then processed them into one file that ended up being approximately 3.1 gigapixels. 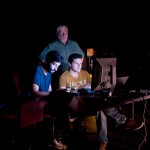 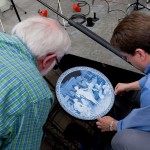 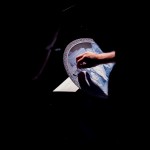 Even the smallest specks of dust are captured by the cameras 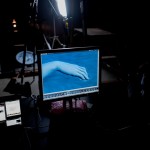 Checking details on the monitor 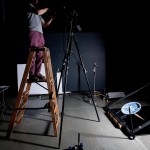 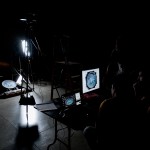 Positioning the capture device and stitching together the final image