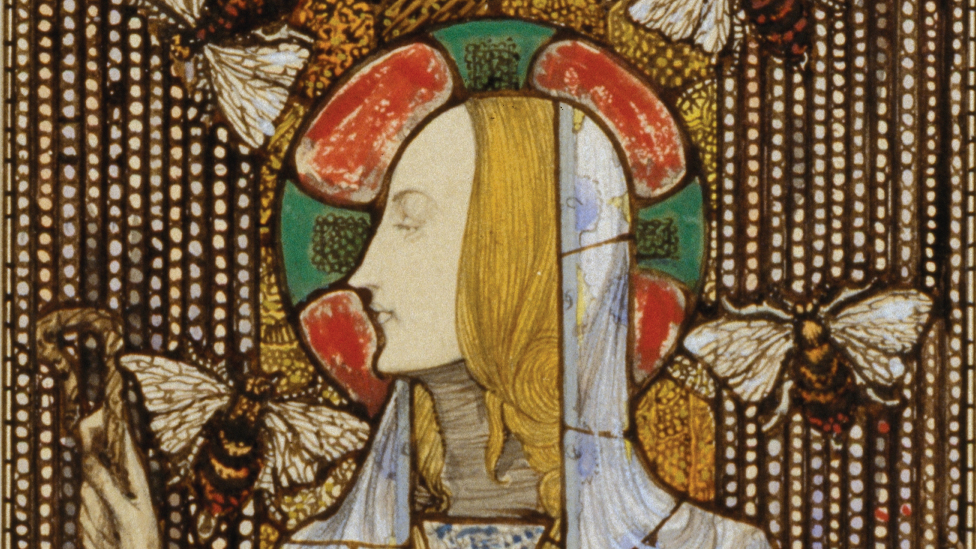 Harry Clarke (1889-1931) was a Dublin-based stained glass artist and illustrator who was one of the leading exponents of the Irish Arts and Crafts movement. Amongst the many jewels in the collection of the Rakow Library, perhaps some of the finest works on paper are three design drawings by Clarke, those for windows representing St. Gobnait  (1916), Saints Doulough and Colmcille (1924), and a lunette for The Eve of St. Agnes (1924).

The most remarkable of the three is the stained glass window design of St. Gobnait for the Honan Chapel on the grounds of University College Cork. The Honan Chapel (consecrated in 1916), through its furnishings and interior design, was to be the ultimate expression of the Irish Arts and Crafts movement. Clarke would eventually be commissioned to design and produce eleven out of the chapel’s seventeen stained glass windows between 1915 and 1917. Those windows representing the three patron saints of Ireland—Saints Patrick, Brigid and Colmcille—were to be placed over the west end entrance, while the patron saints of the Irish province of Munster as well as saints with a strong Cork association were to constitute the nave of the chapel. The St. Gobnait window is without doubt the most renowned of the series, and it is one of Clarke’s crowning achievements during the earlier part of his career. In the words of Clarke’ s biographer, Nicola Gordon Bowe, “They are jeweled masterpieces which impressed visitors as much when they were installed as they do now, and established Clarke’s reputation before his twenty-eighth birthday.”[1]

The story of the 6th century Saint Gobnait is important in deciphering the imagery of the window. Although no written account of her life was compiled, she is mentioned in the 13th century Life of an associated saint, St. Abbán. She was supposedly born in County Clare, but settled at Ballyvourney, County Cork where she founded an abbey. This town still venerates St. Gobnait each year on her Feast Day, February 11th. Clarke adapted the profile of a red-haired St. Gobnait from 15th century Renaissance images by Italian painters Donatello and Baldovinetti.

The design drawing features Gobnait in various scenes. In the center panel she holds her crozier and a model of her abbey church. As Gobnait is the patron saint of bee-keeping, the small figure below her in the design is one of several thieves onto whom the saint released her avenging bees to prevent the theft of her beehive, eloquently described by Gordon Bowe: “[the] techniques, choice and treatment of glass and imaginative and expressive detail of the three figures of St. Gobnait, the little novice and the curly-haired robber, are amongst Clarke’s finest works in glass.”[2]

Another interesting detail, this one in the top portion of the design, is the white crystal line Gobnait has placed to ward off the plague. The beautiful Gobnait, contrasted with the plague victims outside that line and the menacing thieves below, is an example of the juxtaposition often found in Clarke’s work. 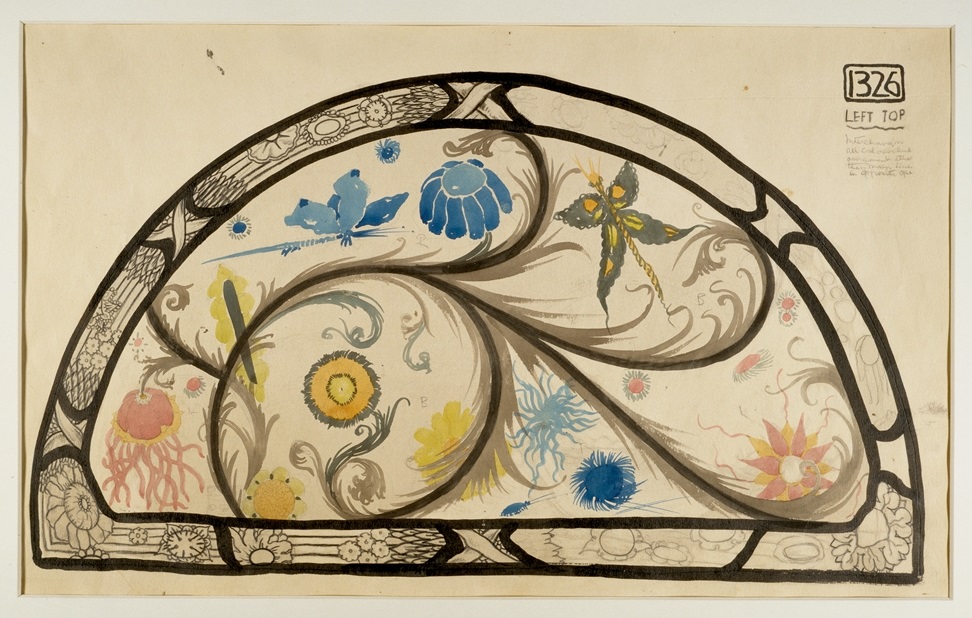 The second drawing in the collection is a presentation drawing for one of the two lunettes featured above the “Eve of St. Agnes” window. This window brings to life a poem of the same name written by John Keats in the early 19th century. It tells the story of the fasting ritual of young women, specifically that of Madeline who pines for Porphyro, on the Eve of St. Agnes to inspire dreams of their future husbands. Porphyro visits Madeline that night and, upon the realization she was not dreaming, the two flee from her disapproving family. In 1924, Clarke was awarded a gold medal for the window at the Tailteann Art Exhibition. The Eve of St. Agnes window currently resides in Dublin City Gallery The Hugh Lane; it is a great testament to Clarke’s talents as a storyteller.

Proposed design for a two-light window with Saints Doulough and Columba for the Chapel of the Oblate Fathers, Belcamp, Co. Dublin. Harry Clarke, 1925. Collection of the Rakow Library, The Corning Museum of Glass.

The final Harry Clarke piece in our collection is a window proposal for the Chapel of the Oblate Fathers in Belcamp, Dublin, Ireland. This design consists of two drawings, one atop the other, depicting the Irish Saints Doulough and Colmcille (Columba); the upper drawing is intricately detailed in pencil while the one below is a watercolor. It is signed by Clarke and dated 1924. St. Colmcille (521-597 AD) founded monasteries throughout Ireland, including that of Kells associated with the famous illuminated manuscript gospel, the Book of Kells which dates from the turn of the ninth century.