On September 18, 1863, Frederick Carder was born in Staffordshire, England. Over the next 100 years of his life, he would go on to become one of the greatest contributors to glass design in the 20th century. Frederick Carder in his library

Carder left school at age 14 to join his father Caleb Carder’s pottery business in Brierley Hill. Still interested in furthering his education, he studied chemistry and technology in night classes. In 1879, Carder became fascinated with glassmaking after visiting the studio of John Northwood. Soon after, in 1881, he went to work as a designer at Stevens & Williams, a large English glassmaking company, where he experimented with glass colors and designs.

In 1903, Carder and his family—wife Annie and two children, Cyril and Gladys—moved to Corning at the invitation of Thomas G. Hawkes, owner of Steuben Glass Works. For the next 30 years, Carder had a free hand in designing the firm’s products and developing new colors and techniques. His hallmarks of design were color, variety, and versatility. In 1932, when Steuben’s new president decided to concentrate on colorless glass, Carder left to become design director of Corning Glass Works. Carder’s glassmaking career ended in 1959, when he closed his studio at the age of 96. 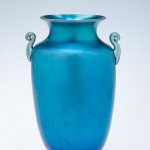 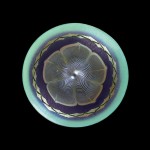 During the 82 years in which he worked with glass, Carder produced many works that are dazzling in their virtuosity. He designed more than 6,000 glass objects in 140 colors. The sesquicentennial of his life was commemorated in 2013, and the legacy of this gifted designer is still thriving.

The most befitting tribute to Frederick Carder’s prolific career in glassmaking is the Museum’s visually stunning Carder Gallery. The several thousand pieces on view show every type of glass that Carder created from the founding of Steuben in 1903 until 1932. Also on view are examples of works from his entire career in glassmaking from 1880 to the 1950s—from early pieces made at Stevens & Williams to individual pieces he created in his retirement. Carder’s golfing partner and friend Robert F. Rockwell, a Corning businessman, assembled a remarkable collection of Steuben glass in the 1950s, which was donated to the Rockwell Museum of Western Art and is now on long-term loan to The Corning Museum of Glass. Most of this collection is shown in the Carder Gallery, which also houses much of the Carder glass owned by the Corning Museum, as well as 82 additional loaned pieces of Carder glass from independent collectors.

Tens of thousands of visitors each year marvel at case after case of shining Aurene, Aventurine, Tyrian, Rouge Flambé, and Cintra glass along with expertly cut, cased, etched, and engraved works.

Since 2000, the Carder Steuben Club has hosted enthusiasts, researchers, and collectors of Carder and Steuben glass at an annual symposium in Corning, co-hosted by the Museum. Attendees of the 2013 sesquicentennial celebration this past September enjoyed lectures including a talk by Audrey Whitty, the Museum’s curator of European glass, on Carder’s early years at Stevens & Williams, and a discussion led by Mary Jean Madigan on the series of modernist engraved sculptures created by Steuben during the Cold War. “We enjoy welcoming the Carder Steuben Club to Corning each year,” said Karol Wight, the Museum’s executive director, “Their dedicated interest in the collecting and research of Carder glass is a testament to the designer’s legacy.”

The Club’s mission is to encourage and promote the collecting and enjoyment of the glass of Carder. This past year, Club members took on a task to assist in the reinstallation of a work of Carder’s with a significant local connection.

At seven feet tall and 42 inches wide, the Frederick Carder Memorial Window is made of cast Bristol yellow glass surrounded by colored glass tiles. The most extensive window designed by Carder and produced by Steuben, it is special to both the city of Corning and the man who created it.

The window is a memorial in honor of the soldiers from Corning who honorably lost their lives in World War I. Among the names listed is Carder’s son Cyril, who was killed by enemy gunfire in the Battle of Soissons on July 21, 1918. Carder War Memorial Window showing a maiden “Victory” holding a shield on which is listed the names of Corning, NY, men who lost their lives in World War I, including Cyril Carder, Frederick Carder’s son. Steuben Glass, Corning NY, 1930. City of Corning.

The leaded glass window and two accompanying honor rolls were reinstalled at Corning’s City Hall in September 2013 after being in storage for over a decade.

Made in 1931, the window’s first home was Corning’s World War Memorial Library at the corner of Pine and First Streets. The library eventually moved and, in 1987, the window was relocated to the Rockwell Museum, where it was on view until renovations in 2000 caused it to be placed in storage. “It is great to find a new home for the window and get it out in a place for people to view,” said Stephen Koob, the Museum’s chief conservator and member of Corning’s Public Art Committee. “The initiative to take the window out of storage has been a fitting way to celebrate Carder.”