If you ask scholars or collectors why they are so passionate about their work, they may allude to their love of “primary sources” in responding. Primary sources are original items dating from the period being studied. To researchers, they are a valuable means of understanding the past as they offer first-hand testimony to the time in which they were produced. The Rakow Library recently acquired a particularly intriguing primary source—an 18th century land indenture between glass manufacturer Samuel Parker of Fleet Street in London and Philadelphia merchant James Cowles Fisher. Dated February 4, 1797, the contract’s “Articles of Agreement” outline details of an exchange of 13,500 acres of land in Northumberland County, Pennsylvania for “manufactured Glass Wares of general assortments one equal fourth part thereof being of Flint Glass and the other three fourth parts thereof of Crown Glass to the amount in the whole of Seven thousand and eighty seven pounds ten shillings of lawful money of great Britain.”

When acquiring resources, the Library’s first mission is to be a good custodian of the resource. This includes ensuring that the material is in good condition and ready for use by researchers. The contract, which is written in iron gall and red ink on parchment, came to the Library as it appears below, folded 20 x 10 cm (the way it had been stored for some time). In its folded state, the document was essentially useless: the stress of unfolding and refolding the paper or attempting to flatten it without using the proper techniques would do lasting harm, thus shortening the life of this valuable work. Making the document available to researchers meant conserving the contract. 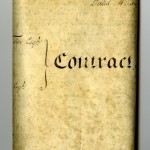 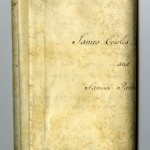 The Land Indenture before conservation, tightly folded. The names of the parties can be seen in the view on the left. [Land indenture between English glass manufacturer Samuel Parker and Philadelphia merchant James Cowles Fisher]. CMGL 133977

Conserving works on paper, like conserving glass, takes a great deal of skill. The process can be time consuming and expensive. Simply unfolding a document that has been stored for years in a folded state can take several painstaking months, particularly if the paper is in bad shape and requires additional treatment. Happily, our land contract’s biggest issue was the way it had been stored; the paper, though tightly folded, was in very good shape for its age. We sent the contract to a paper conservator for preservation. Over a period of 3 months, the paper of the contract was softened and relaxed, then slowly unfolded. The resulting document, now unfolded to its true 67 x 86 cm size, was returned to us in September. The result was amazing: A photo of the Land Indenture after conservation. Note Parker and Fisher’s seals in red at the bottom of the document[Land indenture between English glass manufacturer Samuel Parker and Philadelphia merchant James Cowles Fisher]. CMGL 133977

Fully unfolded, the manuscript reveals its beauty. The handwriting is elegant, precise; the signatures of Parker and Fisher, bold. The original wax seals of both parties are intact, the stamps for the taxes still affixed to the side of the document. In the text, we find the details of an inter-Atlantic business agreement exchanging land on the frontier of the United States for glassware. We gain insight into the importance of glassware in Early American society—it was obviously of great utility and desirable. The terms of the agreement tell us about the value of glassware during the period and specifically the relative value of land and glassware. The document itself is evidence of legal processes and agreements; it also indicates that despite ongoing tensions between England and the early United States, the affairs of the two countries and their people were very much intertwined.

Now that it is conserved, the land contract will be stored in our climate-controlled vault with the Library’s other primary documents and original works on paper, ready for researchers to unlock the rich history it contains.