150 years ago, President Abraham Lincoln issued a proclamation creating a national day of thanksgiving on the last Thursday in November. Before this, only certain areas of the country observed a day of thanksgiving with regional foods and customs. These days were designated by local or state officials and took place anytime between October to January. This American holiday is symbolized by the gathering of friends and families to share a special meal and express gratitude for the year’s blessings.

Since I frequently research and discuss how people used their glassware in the past, and Thanksgiving is such a traditional meal, I wanted to highlight a few historical sources that might encourage you to mix it up this year as you consider setting the Thanksgiving table. This table setting was illustrated in the March, 1859 issue of Godey’s Lady’s Book, which became one of the most widely circulated magazines in the mid-nineteenth century. The magazine included fashion plates, guides on homekeeping and cooking, and cultural essays. The editor, Sarah Josepha Hale (1788-1879), was the leading advocate for the nationalization of Thanksgiving Day. She worked tirelessly for years to achieve the establishment of the holiday, using the publication as a platform for her cause. It was her strong belief Thanksgiving would help unify the divided nation. 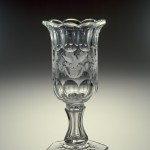 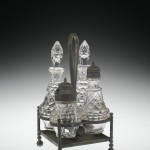 Featured on the table in this illustration are several items of glassware for serving food including a celery vase, butter dishes, salt dishes, and a castor set. In the mid-nineteenth century, celery was a very costly vegetable to purchase and became something of a statement of income when it was featured prominently in a tall vase in the center of the table. Butter dishes were round rather than rectangular because butter was made either by hand on the farm or at a creamery. It was shaped into round balls or pats, unlike the 4 ounce sticks common today. Open salt dishes required salt to be spooned onto your food, rather than shaking it from a salt shaker. Pepper was separated from salt and was part of the castor set. Castor sets, also called cruet sets, were important for adding spice and flavor to food. They held oil, vinegar, mustards and peppers.

Formal dining was more common in the nineteenth and early twentieth centuries.  Many of these table setting guides were intended for daily application and were likely used in middle and upper class households.  And just like today, setting the table for a holiday meal would necessitate bringing out the very best china, silver and glass tableware a family could afford. Cover of The Little Book about Glassware: Treating of the Etiquette of the Glassware Service and the Art of Using Fine Crystal. Fostoria Glass Company, Moundsville, West Virginia, 1925. Collection of the Rakow Research Library Bib ID: 20608.

Beverages were an integral part of the meal, and in order to assist housewives with the use and placement of various beverage containers, this illustration was printed in The Little Book about Glassware: Treating of the Etiquette of the Glassware Service and the Art of Using Fine Crystal.  Created in 1925 by the Fostoria Glass Company of West Virginia, this guidebook was meant to help market glass manufactured by the company by encouraging hostesses to purchase as many items in a matching suite as they could afford.

Detail, The Little Book about Glassware, page 9. Suggestions on pieces of glassware needed for a formal dinner.

When people tell me about their family heirlooms and traditions, I always encourage them to use their glassware any way they like—whether that means following strict etiquette guides (past or contemporary) or putting their own personal spin on the table setting.  Which of these beverages appear on your Thanksgiving table?  What is missing that you might substitute one of these suggested forms?

And after you’ve consumed and imbibed, a very important thing to remember is to avoid cleaning your fine glass heirlooms in the dishwasher since the harshness of the soaps and the extremes of temperature can damage glass. The handwashing and drying of china and crystal after dinner offers another family bonding moment on Thanksgiving Day, yet I somehow manage to disappear with my pumpkin pie during this process every year!