GlassLab wrapped up design sessions in Paris, at les Arts décoratifs, over the weekend.

Saturday was an energetic day. We braided glass, made a glass object to contain projected images, and created vases and sculptures with glass and beautiful copper cut outs. If you think that braiding glass is simple, think again. Hot glass sticks together. The GlassLab team tried braiding by standing with three pipes and handing them around. No success. Then, they tried by grabbing the hot glass with diamond shears. Success! The look on designer Benjamin Graindorge‘s face was one of sheer delight and the crowd, who was on the edge of their seats, cheered. Benjamin loves experimentation and chose the project to really understand what the glass could do. From this project, he was struck by what the material does when it’s hot. “It’s living,” he says. Antoine et Manuel are graphic designers who have worked together for about 30 years. They have recently started working on GIF animations and, when approached about working on GlassLab, they conceived of an object in which they could project an animation, creating “life inside the glass.” On Sunday morning, after the glass had annealed, they tried out a short projection of video of stained glass. Despite a fast-moving windy rainstorm, the crowd on Saturday stayed through the entire design performance by Didier Tisseyre. Didier is an artist who works in different mediums, including cast glass. This opportunity with GlassLab allowed him to experiment for the first time in many years with the immediacy of hot glass. Didier came with beautiful watercolor sketches of vases, and a cache of copper cut-outs he’d made of small plants, animals and other abstract shapes that were incorporated into the glass objects. 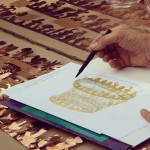 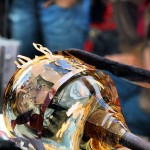 Not only was the team able to create beautiful objects, but the work taught him about the possibilities and realities of combining a material like copper into hot glass. The public design performance was also a new experience for him. “Glass is so fascinating,” he says, “I forgot I was working in front of an audience.” 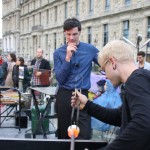 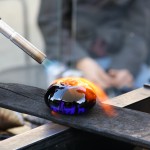 On Sunday, Steven Ladd of the two brother design team Steven and William returned to GlassLab. The brothers’ previous work includes “micro environments” using textiles and small glass elements within boxes. In Paris, they drastically changed the scale of this concept with a design for oversized glass beads that will be made into an 8 foot beaded tree that will take approximately 2 years to complete.

Vanessa Mitrani has worked with glass for the last 15 years. Her designs place blown glass inside restraints. For her GlassLab design session, Vanessa brought metal pieces that would become the handles on blown glass forms. Working with GlassLab “was really amazing,” she said. “We come from different countries, but glass is a common language.”

None of this experimentation would of course have been possible without the talents of a strong team. This was the second time glassmakers Chris Rochelle and Adam Holtzinger have worked with GlassLab, and the first for Charlotte Lemaire and Karin Forslund. Chris said, “Incredible team, great glass, generous hosts, and a spectacular location in a world class city…amazing all around!”