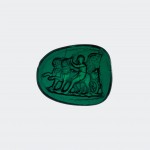 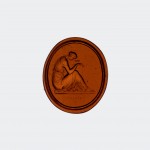 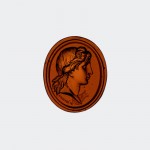 Each of these three cast gems was produced by the London-based business of James (1735–1799) and William Tassie (1777–1860). The Tassies were merchants of impressions of classical gems during the 18th and 19th centuries. They provided sets and selections of impressions in a variety of materials.

Among the gems were many eighteenth-century originals (by Marchant, Burch, and other artists employed by the Tassie’s) of contemporary notables, including Napoleon, Nelson, and Lady Hamilton. The name ‘Burch’ is inscribed on the gem of Apollo, and the name ‘Marchant’ on the gem of Agrippina. The Tassie set also includes reproductions of many ancient Greek and Roman gems, including the Roman cameo signed by Sostratos (now in the collection of the British Museum, inv. No. 1890,0601.37).

The gem with the figure of Agrippina, a Roman woman who was married to the general and statesman Germanicus, depicts her in an attitude of mourning for her dead husband.

The gem of Cupid/Eros depicts the partial scene of two lionesses or female panthers pulling a chariot, and led by the god of love. Only part of the scene is preserved because the ancient gem from which the scene was copied was broken. In Greek letters below the scene is preserved the name of Sostratos (C¬ CTPATOY – meaning ‘of or by Sostratos’), the gem engraver responsible for carving the ancient Roman cameo gem from which the glass gem was copied.