A concrete pump boomed out to place concrete in a wall form. The back of the concrete truck can be seen just beyond the pump truck.

On large construction sites like the Museum’s North Wing Addition, it is sometimes impossible to back concrete trucks close enough to the form where the concrete is to be placed.

At the Museum, the construction site can only be approached from two sides. In the old days, elaborate networks of planks would allow wheel barrows or two-wheeled concrete buggies to be pushed to the form. The buggies deliver 6 cubic feet and the wheelbarrow less. This was slow, heavy work. The planks were springy and got slippery. Today, there are self-propelled concrete buggies which work well on some sites, but not at the Museum at this time. The solution is a concrete pump. The wall forms ready to be filled with concrete. 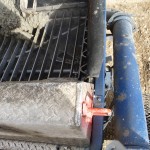 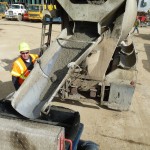 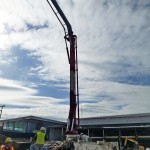 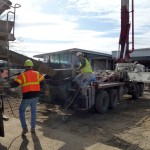 The concrete is offloaded from the concrete truck into the hopper at the back of the pump. The pump pushes the concrete through the blue pipe seen at the bottom right of the picture. There is a pipe which is located at the center of the truck. The concrete goes to the pipe on the boom. The boom can swing out more than 100 feet straight back and 120 feet to the side. The farthest the driver said he had pumped the concrete was 565 feet. This concrete has a superplasticizer added. This allows the Ready Mix plant to add less water and still allows the concrete to pump easily. It meets ASTM C1017. The concrete is stronger.

Additives are mixed into the concrete batch

Before the concrete was poured, an additive was placed in the hopper and run through the pump and pipe to lubricate them.

The pump operator controls the position of the boom and the speed of the pump remotely from a box strapped to his waist. The first part to be poured was a small, rectangular wall. It was decided to divide the wall into eight sections with bulkheads and pour every other one.  This allows for expansion joints and prevents shrinkage cracks. Concrete is pumped into the wall form.

The concrete is poured up to the red chalk line inside the forms. The concrete is vibrated to eliminate air pockets and to help with placement. The finisher smooths the top surface to the correct height. Wood is pushed into the top of the cement to create keyways to lock in the next pour. The concrete pump is especially useful for pouring columns. The concrete should not fall more than four feet to ensure proper placement. This is an experimental column poured to examine the surface. The architect will examine it for possible approval. Concrete samples are formed and stored in specified conditions. These cylinders will later be tested to make sure they comply with the engineer’s specifications.