The North Wing expansion project is moving along. Some concrete footings for walls and columns have been poured and plumbing drain lines have been placed.  The current level of the dirt on the construction site is far below the eventual level of the gallery floor. Since the floors will all be poured concrete, we’re starting at the bottom and working our way up. The floor of the gallery will be at the level of the horizontal rebars coming out of the column base.

Above is a column base. The floor level will be within the horizontal rebars. The 2x4s are attached to the rebars to prevent accidents.

The soil must be infilled to the level of the bottom of the concrete floor. If all of the soil is added at once, it will settle and leave the floor unsupported. The solution is to add the soil in lifts or layers and compact them so they will not settle. For construction of the North Wing Addition, the lifts are 6 to 7 inches at a time.

The soil lifts are installed and then compacted.  Above are two machines to compact the soil.  The plate is self-propelled.  Both utilize vibrations to increase effectiveness.

The soil’s compaction must meet the engineer’s specifications. The soil is analyzed using the Proctor compaction test. This test determines the optimal moisture content of the soil. With that, the engineer can calculate the maximum bearing capacity of the soil. The engineer specifies the acceptable compaction percentage for a particular project. In our case, it is 95% compaction. If the soil gets too wet, it may never achieve 95% compaction and it must be removed and mixed with drier soil. This density test is consistent with the requirements of the American Society of Testing and Materials (ASTM) and American Association of State Highway and Transportation Officials (AASHTO).

After the soil is placed and compacted, it must be tested. 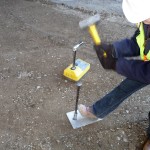 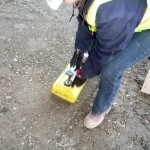 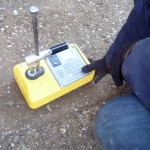 Amanda Hatchford demonstrated how the testing works. First, she makes a 6 inch deep hole in the soil. The gauge probe is inserted. The gamma ray source in the probe is lowered to a specified depth. Gamma rays are transmitted through the soil to detectors in the gauge. The variables are entered and the gauge can calculate the density and the moisture. Our test showed 94%. This test indicates that the soil needs a little more compaction. Our sample was re-compacted and soon passed. The lifts are added one at a time until the desired level is met.